THE RISK OF A SMOKY RUN

Unfortunately, it's fire season. And athletes everywhere want to know whether it's safe to exercise outside - is smoke doing the body more harm than the exercise is doing good? Volée member Dr. Taisa, author of Running and the Science of Mask Wearing and A Scientific Look at the Gaiter Controversy took a deep dive on this very issue and has guidelines for you. Knowledge = power!
Currently, some of the worst fires in history are running through the west, from California to Colorado. Likely, if you're anywhere west of the Mississippi you're feeling the effects and perhaps you're wondering "Is it really that much worse to run in the smoke than hike or walk?", at least, I was. So, I read a bunch of research papers and bugged my partner who researches airborne particulates with questions. This blog provides a synopsis of what I learned. And yes, sadly it actually is much worse to run in the smoke than hike or walk.

Disclaimer: While I am a PhD-holding scientist, airborne particles are not my area of expertise (I work on medical devices). Information in this post provides an overview of literature which has been helpful for me, but it is by no means exhaustive, nor meant to be medical advice. That said, hopefully you may find it helpful!

First things first: What metric should we focus on?

The best metric to keep tabs on is PM 2.5, which is "particulate matter (particles or liquid drops) under 2.5 micrometers". It is measured in concentrations of micrograms per cubic meter (). The composition of these particles varies and includes things such as acids, organic chemicals, metals, soil and dust.

Why? These small particles burrow deep in your lungs and can even enter your blood, causing local and systemic inflammation and circulatory issues.

In fact, PM 2.5 exposure is one of the leading causes of premature death worldwide. Apart from premature death, effects of PM 2.5 exposure range from "eye and respiratory track irritation to more serious disorders including reduced lung function, bronchitis, exacerbation of asthma and heart failure". [2] Most sources of PM 2.5 come from combustion, think car engines, coal and gas power plants, fireplaces, stoves, and of course, wildfires.

Should I be concerned if I am not "high-risk" or "sensitive"?

Yes. While populations such as the elderly or asthmatics are at higher risk for feeling effects of PM 2.5 exposure, "exposures to fine particles can also affect healthy people, causing respiratory symptoms, transient reductions in lung function, and pulmonary inflammation". [2] It's also been found to significantly increase blood pressure, hormones, insulin resistance and biomarkers of oxidative stress and inflammation in a (perhaps questionably ethical) study done on healthy, college students. [3]

Furthermore, runners, bikers, roller-skiers and the other endurance athletes are extra vulnerable. Why?

Multiple studies have found that even short-term exposure can be harmful [6-8]. It's also been found to have negative effects on your brain, including an inhibition of the positive effects of exercise on cognition, and even cognitive decline. [8] In the longer-term, effects can include endocrine disruption and decreases in VO2 max. [9,10]

With respect to athletes in particular, two relevant studies have come out. In one, they tested 15 individuals with double bike trials and ultrafine PM: PM1, particles under 1 micrometer, which is a subset of PM2.5. First, they rode a trial in low-PM, then a 3-day break, then a second trial in low-PM. Next they took a week break and repeated the experiment in high-PM riding one high-PM trial, a 3-day break, and a second high-PM trial. They found performance decreased only in the second high-PM trial, indicating some sustained effect from the PM exposure. [10] In another study, they took 16 adults and followed a similar protocol, but with only a single bike trial. First one trial in low-PM (<12 ), a 48hr break, and a second in higher, but still safe by EPA standards, levels (13-35 ). They found no notable decrease in performance between the two. [11]

Putting these studies together, we can deduce the effects are variable: it is likely that exercise in these higher but still "safe" "yellow" levels is low risk, or it could be similar to the first study where effects of small particles may not appear right away, it could take time, another ride. Overall, as with most of science, the extent of these effects is still an area of open research.

Speaking of "yellow" levels, when is it safe to run and when should you hold off?

While I have not found guidelines for running specifically, we can look to the EPA guidelines and an 2018 interview with Matt Kadlec, an air-quality toxicologist at the Washington Department of Ecology. Current EPA guidelines hold safe PM2.5 standards to be 12 for sustained exposure (multiple days), and 35 for 24-hour exposure.

So is 35 the cut-off? It depends, this is all about managing your risk. Toxicologist Matt Kadlec recommended running normally at levels 0-12, and lowering activity intensity at around 20. So, opt for shorter and easier runs when levels are 20-35 to limit exposure. This would be in line with the bike study that found these "yellow" levels of 20-35 are ok, but as with many other toxins, higher exposure = higher risk.

That said, smoke from wildfires contains lots of other pollutants too: carbon monoxide, hydrocarbons, tannins, polyphenols, are more, which has led to evidence that PM 2.5 from wildfires may be more harmful than from other sources. [12] Thus, I would recommend a balance of the PM 2.5 levels with the overall Air Quality Index (AQI), which incorporates other major air pollutants. For example, if PM < 35, but AQI is Orange or higher, perhaps err on the side of an indoor workout or off day. Of course, if you have respiratory or immune conditions, do take even more caution! Afterall, we are still in a respiratory pandemic so it doesn't hurt to err on the side of caution.

Sites Monitoring Air Quality
I have found the best site to be the AirNow fire map, hosted by the National Oceanic and Atmospheric Association (NOAA). It lists permanent sensors as large dots, and cheaper sensors as squares. Remember many factors such as calibration, cars, and wind can affect sensor readings, so it is best to consider an average for your area. 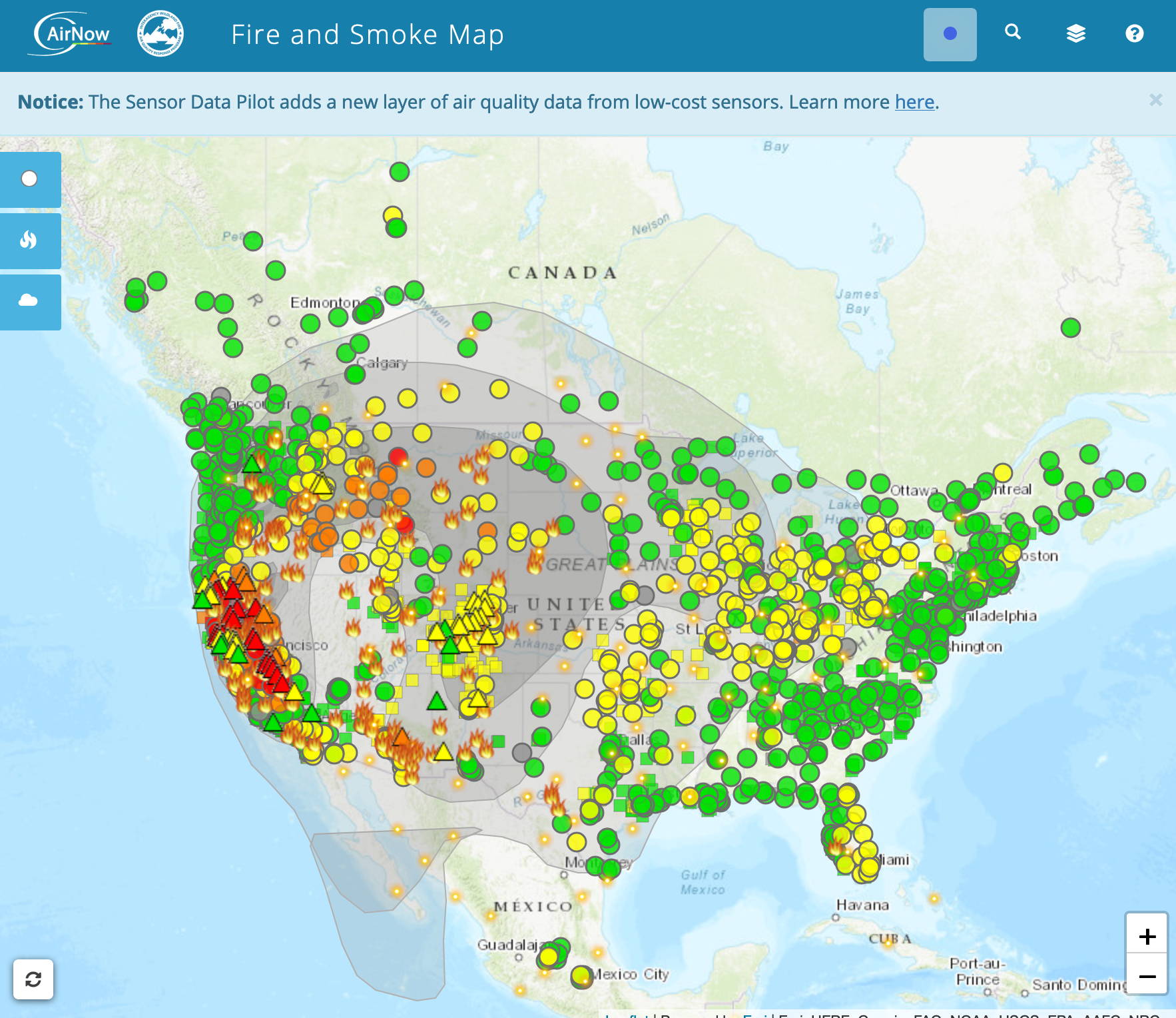 Example screenshot of the AirNow fire map. Circles are permanent monitors while squares are cheaper sensors. Fire emojis are fire.

NOAA also hosts an interactive map of smoke prediction. This map is based on a predictive model so it will not be completely accurate, however, it can be useful for planning outdoor activities.
You may also find it helpful to look at the past trends in air quality to plan your runs. You can find these by clicking on a sensor on the AirNow site. For example, here in Boulder I have found the air quality is often best in the early morning (though this may change). 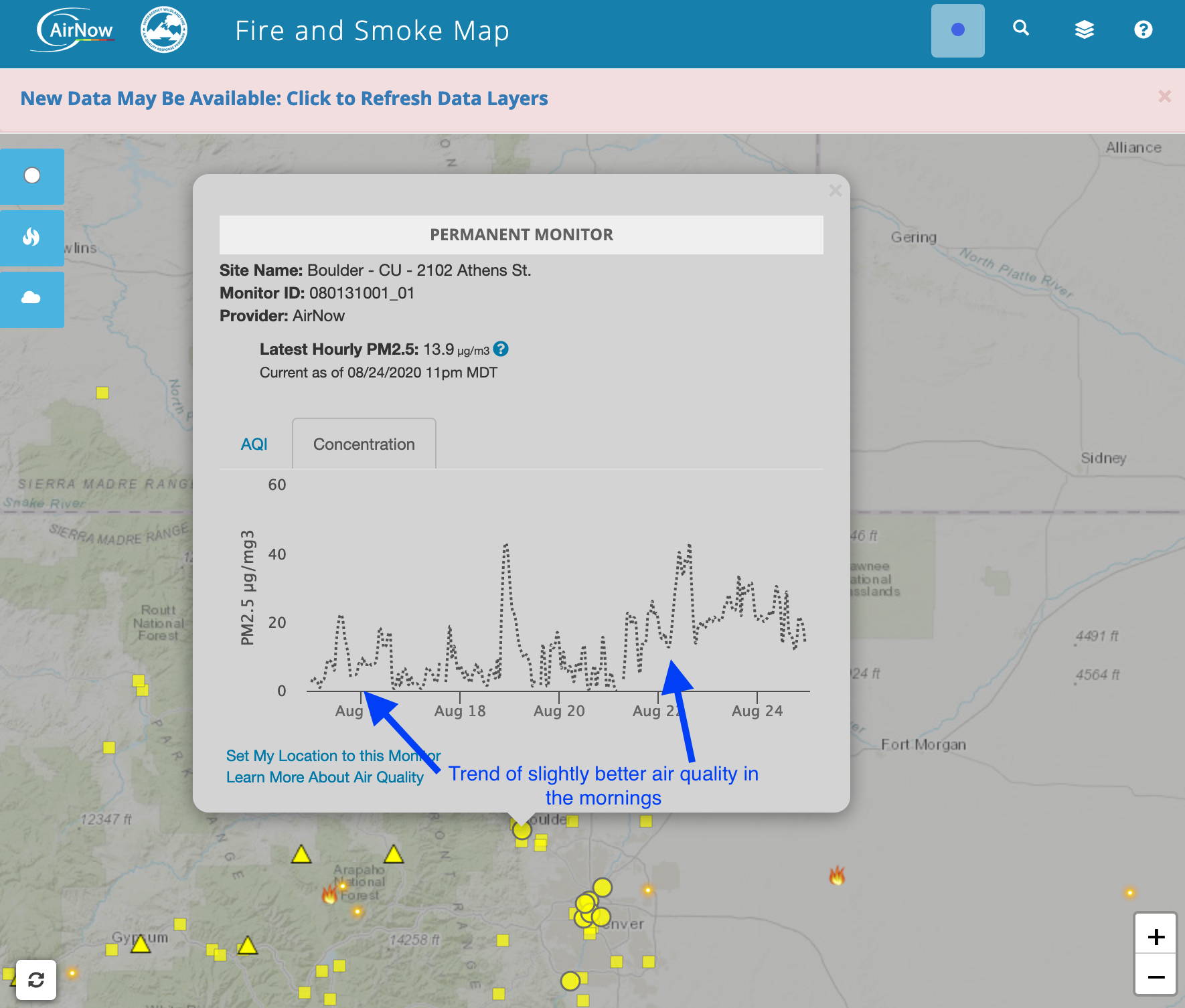 Example trend map when you click on a monitor in the AirNow site. This is our main Boulder sensor and you can see we have a slight trend towards improved air quality in the mornings, perhaps due to wind patterns. 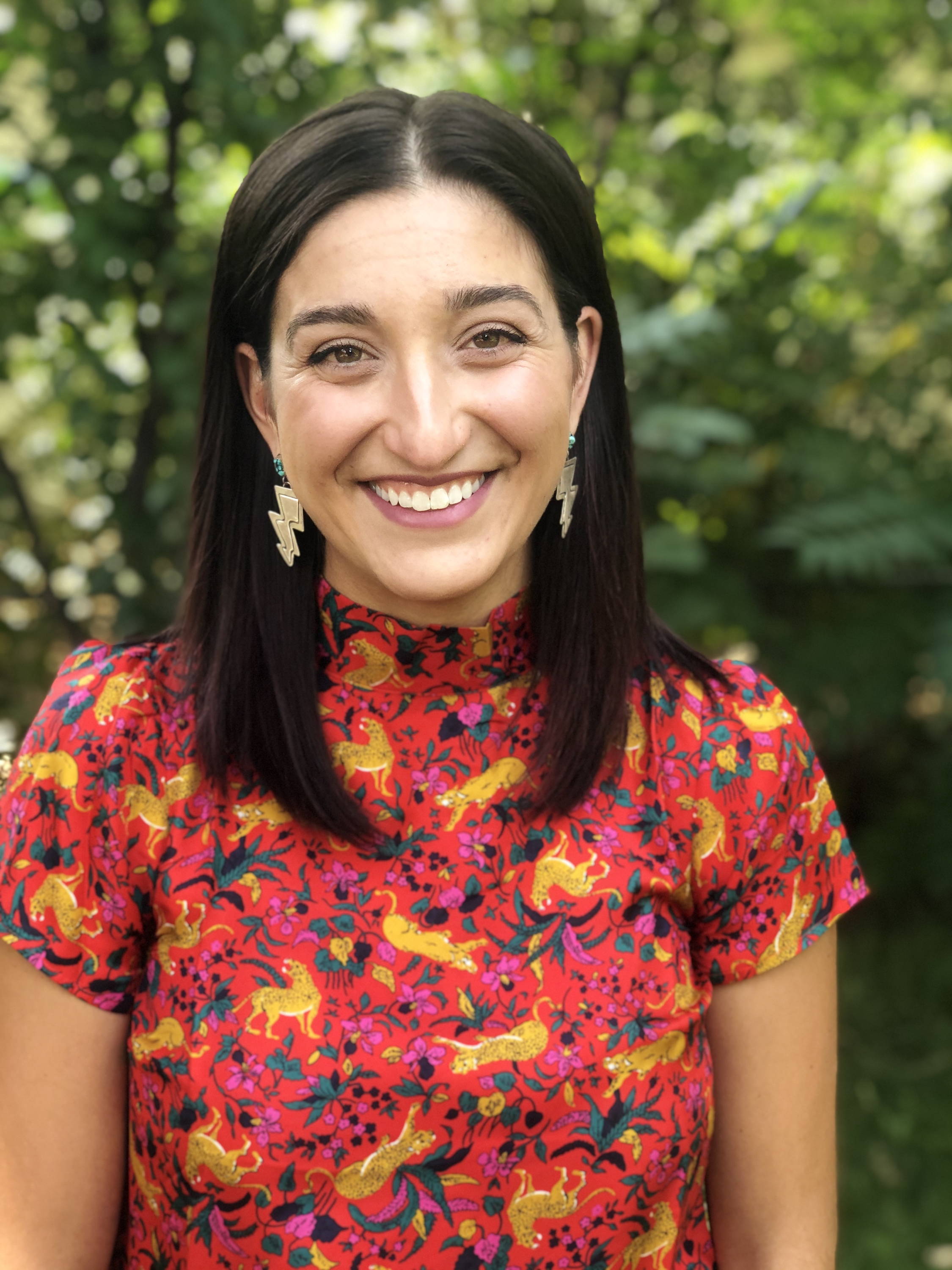 Thank you for sharing. You’ve helped confirm and influence some of my decision around working out in smokey conditions in the San Francisco Bay Area.

Thank you. This helped me understand things with this wildfire smoke much better.

Thank you for this super useful resource!