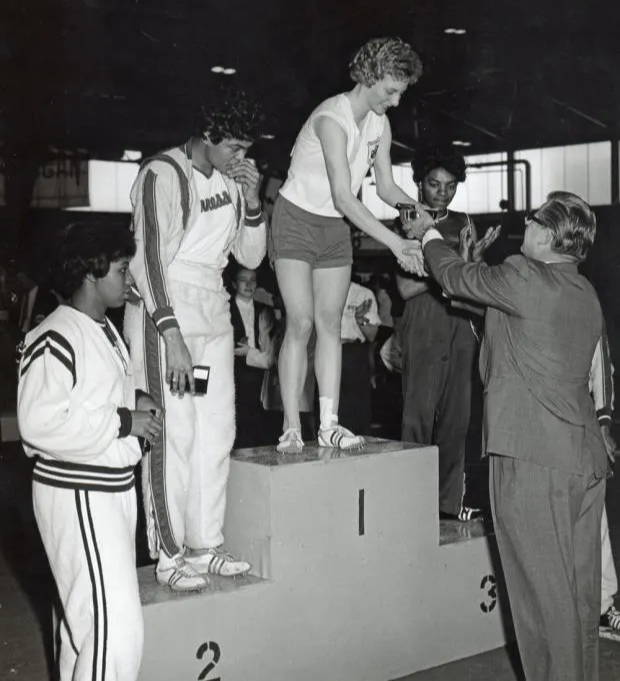 Linda Janell Smith was born in Killeen, Texas in 1947 to Meade and Helen Smith, but the family moved to Kansas where she lived much of her life. Meade himself was a former Kansas sprinting champion, and started training son Meade Jr. (Janell’s older brother). Janell, by then age 10, came every day to watch. Dad started coaching daughter as well, and continued to up through and beyond her trip to the Olympics at age 17.

At age 14 Janell competed in her first national meet, placing among women 8-12 years older. At this point her track portfolio was impressive: 19-ft broad jump, 70-yd hurdles in 9.2s, 220-yd dash in 24s, and the 100 in 10.8. Up until now, Coach Dad had kept her away from longer distances like the 400. She was fast at the shorter sprints, but the field was crowded, and Janell had more strength at her disposal.

In 1964 Janell switched to the 400, hoping the change would increase her chances at making the U.S. Olympic Team for the Tokyo Games that year. She ran the distance for the first time ever in April 1964, setting the American record with a 54.6, and made the team.

Janell ran well in Tokyo, but missed the final by three-tenths of a second, finishing 5th overall. She set sights on the 1968 Mexico City Games.

After graduating from Fredonia High School she attended Emporia Sate Teachers College and continued to run, for a while. In 1966 she came down with both mononucleosis and hepatitis. When she returned to running in January 1967 right heel pain plagued her. In 1967 she officially quit competitive running.

Janell was diagnosed with stage 4 lung cancer in April, and passed away on July 25, 2020. Peace be to her memory.