BEHIND THE SCENES: THE AMD COLLECTION

It’s been the honor of a lifetime to work with my friend and colleague Alison Mariella Désir, for almost a year (!) on bringing the first of many AMD styles to life. We caught up recently to talk through our journey, and for us to all hear her thoughts on apparel, design, feminism, and what went into these designs.

“Comfort and style is acceptable in all places.” — Alison Mariella Désir

Sally: This might be my favorite quote of the decade. Can you please expand on the idea of comfort and style being acceptable in all places?

AMD: The ‘new professional’ is comfort. Wearing styles and patterns and designs that give you confidence. That bring you joy. So when I think about the way I express who I am through clothing, it’s bright colors, patterns, rejecting a sense that you have to dress a certain way. Of course, you want to be respectful, and not harm or offend, but other than that, it’s being true to yourself.

The idea of professionalism is arbitrary and rooted in white supremacist ideas about how you show up. So much of what is considered professional doesn’t speak to me. Particularly now, as a mother, in the pandemic, working from home. 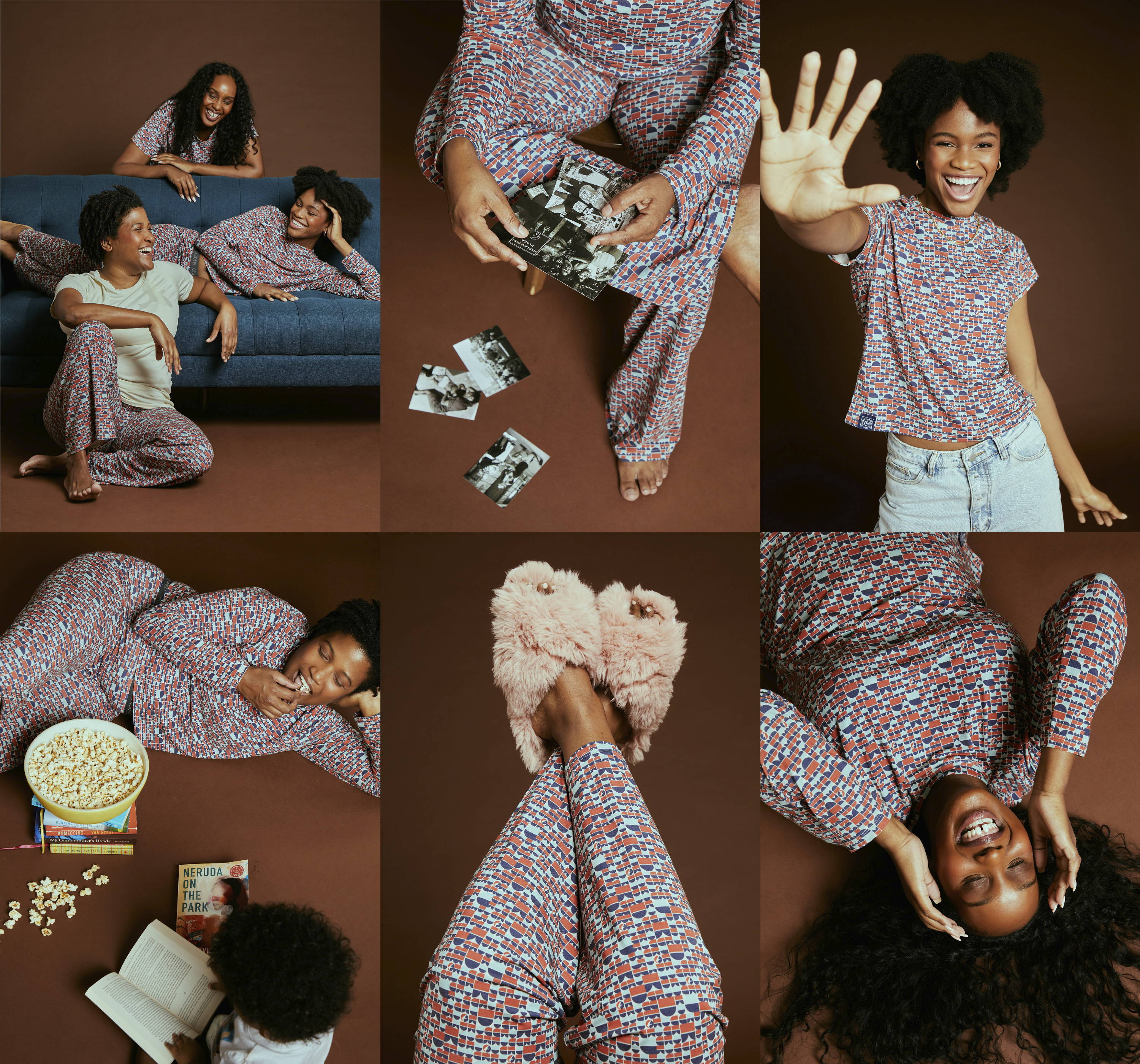 Sally: Tee Lux fabric to the rescue! So, I’m curious, what was your relationship to clothing as a kid? Did you have to wear a uniform in school?

AMD: Going to private school, everyone was super wealthy. We were not. We were firmly middle class. My favorite days at school were the game days when we all dressed up in team colors. The clothes were comfortable, but I also loved it because the clothing was an expression of our community and the pride that we all had in being part of a team, something bigger than ourselves. Lauren Fleshman talks about how clothing can imbue you with powers. Think of the lab coat or a racing kit, there’s a lot of power there. It impacts how that person feels and how they’re received.

It’s all about wearing clothing that helps you feel comfortable, seen, and powerful. Why not be able to sleep in something and wake up and go to your first meeting?

Sally: Did you view the clothes you wore in a certain way as a young adult?

AMD: Absolutely. Even in my early jobs, I really did reject… I never even owned…. What are they called? A suit, lol! I never owned a suit. I was getting away with wearing pointe pants, you know, before leggings were big.

But I just knew, with traditional work clothes, I’m not going there. It’s uncomfortable. I feel like I’m wearing other people’s clothes. Also, going back to this idea of professionalism - professionalism oftentimes is just code for anti-Black. Think about the Crown Act, for example which ensures protection against discrimination based on race-based hairstyles by extending statutory protection to hair texture and protective styles such as braids, locs, twits and knots in the workplace and public schools. And even still - Black people in work environments, sporting events and schools face intense amounts of scrutiny and are penalized for wearing our hair the way it naturally comes out of our heads! That’s just one obvious example of how so-called professionalism is really just white supremacy in action. 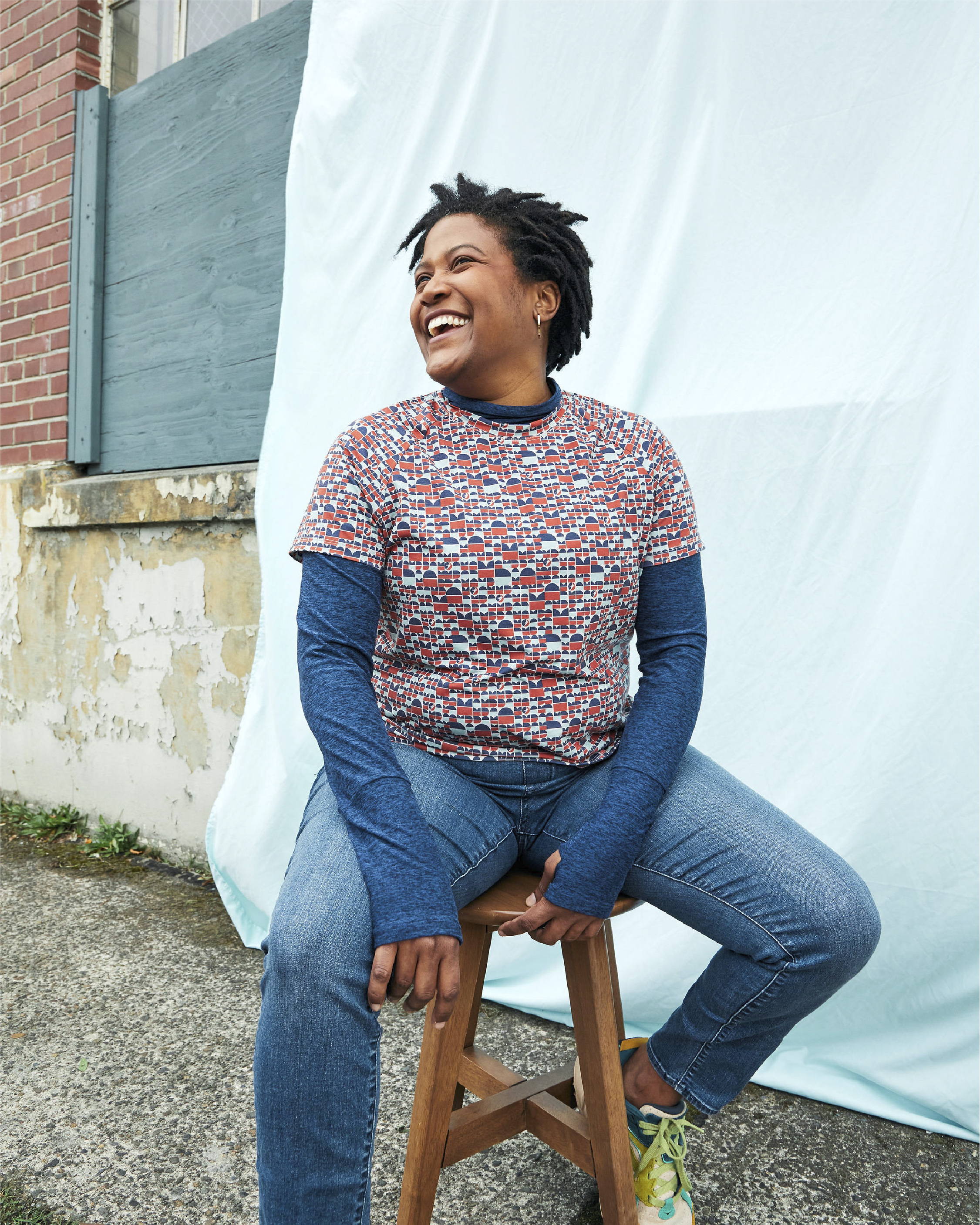 Sally: Were you ever inspired by athletes or celebrities who had their own clothing lines?

AMD: Growing up, I don’t think any women athletes had lines and I was never enamored with any of the men’s lines. But I was in love with FloJo. She didn’t have her own line, but she had her own way of showing up. When you look at how conservatively everyone dressed on the track at the time, she really gave no F’s. That’s one of the things you can do when you’re the greatest of all time - push boundaries. Knowing you can go out there wearing exactly what you want to wear, and pull it off because you know you’re going to do great things. She was unabashedly herself, and I loved that.

This will come out more in my future collections, but this idea that through your clothing, you can send a powerful message that upsets institutions is important to me. Olympian Wyomia Tyus wore black shorts in the 1968 Olympics because she knew it would signal her support of Black athletes and social justice.

Sally: What’s your relationship to clothing today? What do you think about when dressing in terms of form or function?

AMD: The most important thing is comfort, always. I own one pair of jeans, and I bought them recently, and they’re like 90% spandex, lol! Someone said I always look like I’m heading out for a run, or coming from a run and that is on purpose. My life is super active. Stretching, walking, on the floor with Kouri. Form follows function. I want to look nice, and present myself well, but If I can’t move in my clothing, it’s worthless.

When I was younger, and going to clubs and stuff, I would take any amount of discomfort to look good. But now I know better. Discomfort is not a part of looking good.

I mean, I don’t own heels anymore. Thankfully, I grew out of all of them during pregnancy, when my feet grew a half size. I own about 100 pairs of sneakers, though. That’s what makes me feel good. It’s not like I wish I could dress up and could wear heels, those days are behind me. Now, it’s all about looking good AND being comfortable.

We also need more inclusion in all clothing. It was important to me that this collection be available right away in extended sizes, and that women of all body types saw themselves in the imagery.

Sally: You directed the photoshoot that is launching your collection. Tell us more about that process.

AMD: Yes. We had a couple of goals. In terms of presenting the line, there was the more obvious presentation - about the pieces being comfortable, cozy, and soft. In these pics, there is a real sense of joy and ease… Black women with natural hair, loving themselves, all things I care about most, including my son. Both of the women who were there modeling with me, they were so confident in their bodies, their hair and their movements.

Small details too… one of the books I have in my hand, Neruda in the Park, is authored by my friend, Cleyvis Natera, coming out in the spring. I know these pics are going to be seen by a wide audience, so how can I support another dope Black woman’s work at the same time?

Sally: In terms of designing the shoot, where did you look for inspiration?

There are a lot of direct to camera shots. Hands moving toward the camera. Energy, meant to be confrontational. I’ve never seen confrontation as bad, in fact I think great things come from those points of tension and directness. That’s a New York thing - and I really wanted to make sure that New York energy was felt.

Sally: Did you feel nervous at all?

AMD: No. The photoshoot was such a calming, beautiful experience. Actually, Kouri physically took some of the photos because Amber (the photographer) let Kouri look through the eye hole and take the pic. There was so much love and good energy on the set. Everyone on set was able to make suggestions and try things. Lots of good play, allowing us to try things and get the best out of each other. Camille, Maggie, Rachel, Amber… it was a dream team. 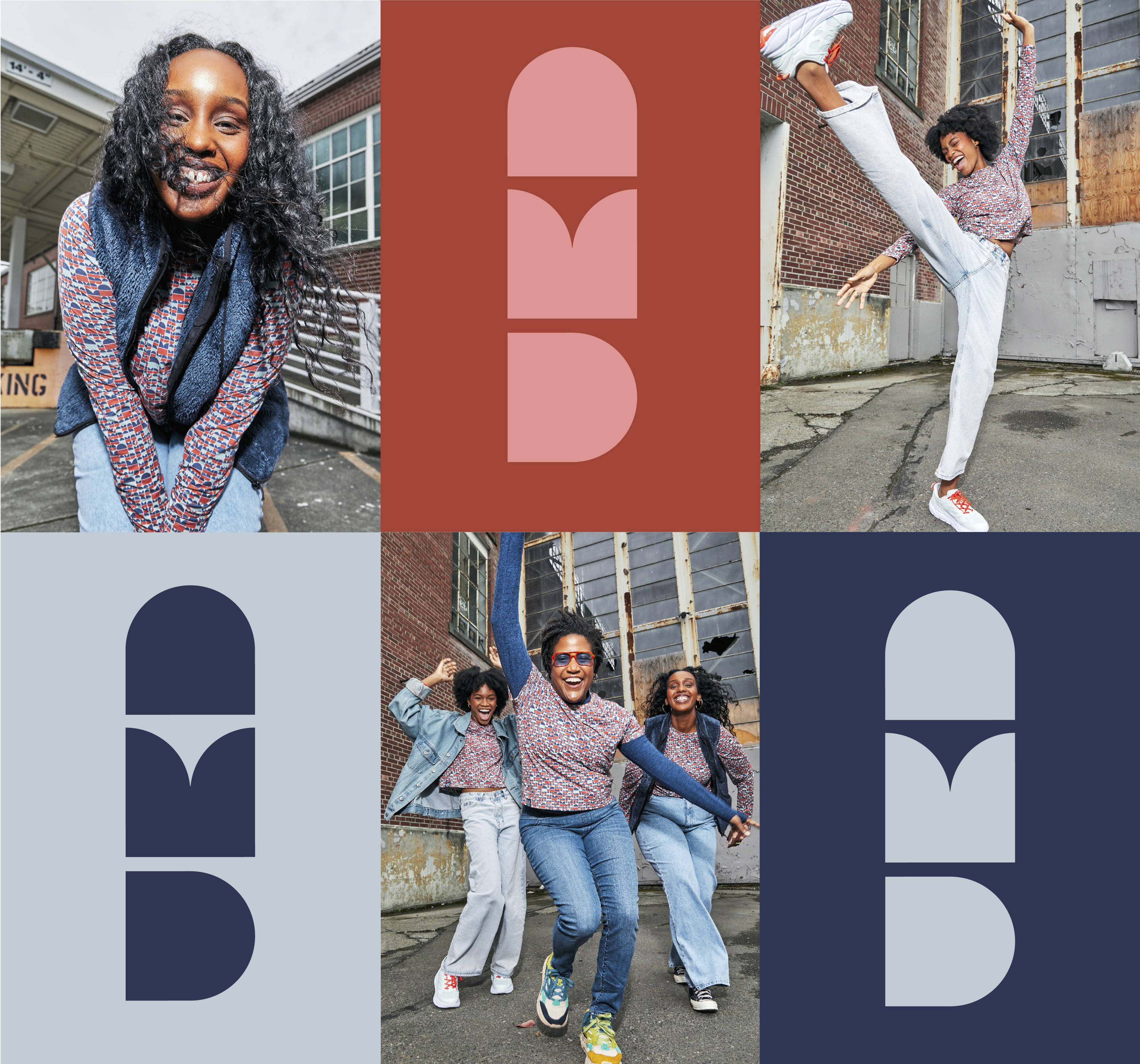 Sally: I agree - it’s so critical for photoshoot sets to have the right energy. Did you have a specific playlist or artist?

AMD: Yes! In studio, we were playing this woman… Tracy G. She calls it “audio affirmations”. Listen: Love, Light And That Good Sh*t: Audio Affirmations For Today's Dope Woman

Another example of how much attention to comfort there was - I told Camille my favorite scent was lavender, she applied lavender scent to my wrists before shooting. Kouri, who we weren’t thinking was going to be on set, was there. At one point, he vomited, we had to take his clothes off, Rachel was cleaning them in the sink, and he wandered on set in just his diaper, and Amber kept shooting. Those are some of my favorite shots!

Honestly, it was the most feminist photoshoot I can ever imagine being on. We were focused on the work but we were also taking care of each other. I’ve been on sets where people want an outcome that’s different from the energy they’re bringing to set and it can be an impossible situation for everyone.

Sally: I’m thrilled this is just the beginning. Looking ahead - New York City Marathon is coming up - including the Harlem Run House and all the excitement that will be going on there over race weekend.

AMD: Yes! There will be more than 100 runners wearing the new Oiselle-produced “We Run Harlem” singlets, for both men and women. So much good ahead!

Sally: 100%! This is just the start of AMD collection goodness! I hope folks know you’ll be rocking your vision with Oiselle for many seasons to come! Thank you, friend.