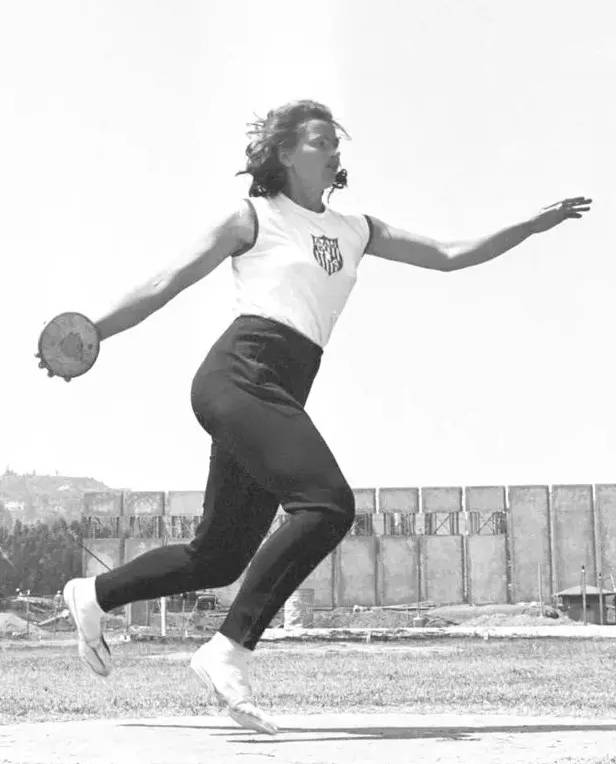 Olga Fikotová was born in Libiš, Czechoslovakia (now Czech Republic) in November 1932. She was a natural athlete, and started her career playing basketball and handball for her country. She was also attending Prague’s Charles University as a medical student, with the dream of becoming an orthopedic surgeon.A throwing coach started working with her on discus in 1954, occasionally playing ‘The Blue Danube’ on the stadium loudspeakers to help Olga get her turning rhythm dialed in. The strength she built on the court for seven years, coupled with an intense focus on discus throwing form for two years, propelled 24-year-old Olga to the 1956 Melbourne Games. She threw 53.69m for both the gold and an Olympic Record.

“My whole being, my body, mind and soul … was just intent on that throw – just throw it as far as it will go,” she says. “There’s a point where an athlete … reaches this special peak performance, where everything goes into that effort. I knew that was all the energy I had.”

It was in the more relaxed atmosphere of the Melbourne Olympic Village (where the Soviet Bloc athletes were specifically told to not to fraternize with Americans) that she met American hammer thrower Hal Connolly. With the permission of the Czech president they were married the following year in Prague (with Dana Zátopková and Emil Zátopek as witnesses, and thousands of uninvited well wishers in attendance).

After the wedding, the couple moved to the U.S. and Olga Connolly continued training. Unfortunately, her home country (specifically the Czech Olympic Committee) took this move to mean that Olga was choosing to not represent Czechoslovakia any more. She was crushed. Instead, she became a U.S. citizen and represented the U.S. in the throwing circle in four more Olympic Games.

"A New Love Story: Olga Connolly, Once the World's Darling, Is Giving Something Back," by Randy Harvey, Los Angeles Times, January 31, 1989