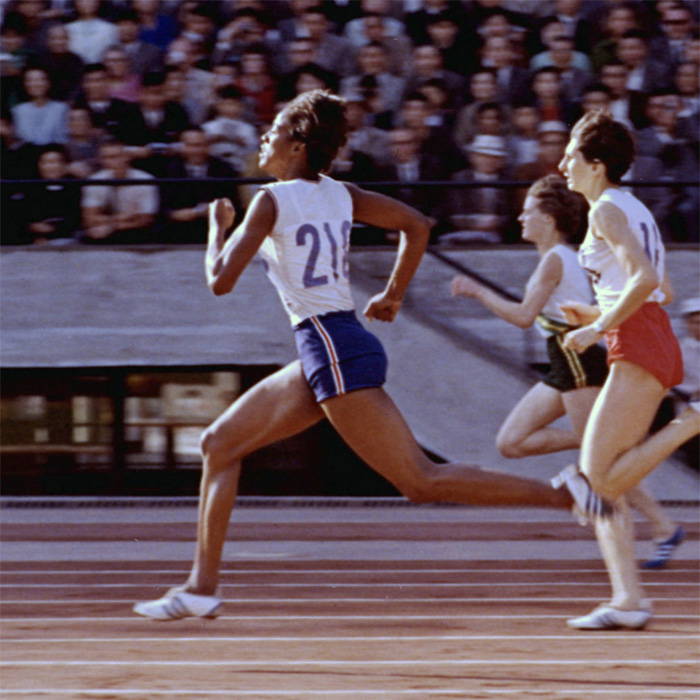 Edith Marie McGuire was born on June 3, 1944 in Atlanta, GA to Alberta and Clifford McGuire (a maid and railroad worker, respectively). Edith was the youngest of four children and got her first taste of track and field during her elementary school’s annual May Day festivities.

In high school, at the age of 15, Edith defeated the top prep school sprinter in the city. Her high school coach, Marian Armstrong-Perkins, recommended her for one of Ed Temple’s Tigerbelle summer clinics at Tennessee State University. She went up to Nashville and attended in the summer before her senior year, and received a scholarship for TSU for the following fall.

While at TSU she competed on the Tigerbelles track team alongside Wyomia Tyus and Willye White.

She was undefeated in the 200m in 1964 and was the favorite to win at the Tokyo Games that year. But her first event at the Games was the 100m, where Edith came in second to fellow Tigerbelle Wyomia in the finals. The two also ran together on the 4x100m relay team which earned silver in 43.9s and broke the Olympic record.

When Edith earned gold in the 200 in Tokyo she broke Wilma Rudolph’s Olympic record (set four years prior at the 1960 Rome Games). Australian Marilyn Black held a lead until the homestretch when Edith pulled ahead.

When Edith and Wyomia returned home to Atlanta they were welcomed back with a parade through the Black areas of town only, and not down Peachtree Street in the center of downtown. “The city did not do us justice.”

Edith retired from competition in 1966 after a summer tour in Africa. In an interview in 1968 she was asked how she felt about the possibility of Black athletes boycotting the upcoming Mexico City Games:

“My opinion is that the Olympics are a big thing. I believe personally if I were a participant I would go. This is me talking, now. This is a chance you get maybe once in a lifetime.

“I think I could accomplish more if I went.”

"First to the Finish Line: The Tennessee State Tigerbelles 1944-1994," dissertation by Tracey M. Salisbury, University of North Carolina at Greensboro