Oiselle and Run 4 All Women could not be more excited to launch registration for the Womxn Run the Vote Relay. This virtual relay will take place September 21st - 27th, 2020, and cover the 680 miles from Atlanta to Washington DC. Participants will learn about Civil Rights landmarks and historic figures while raising money for Black Voters Matter. You can learn all about the relay and register for this historic event here!
How did this relay come to be? Like most big efforts, through a shit-ton of hard work by many awesome womxn. But the idea itself has a meandering origin story, best told by our muses and Athlete Advisors, Lauren Fleshman and Alison Mariella Désir. Below are excerpts from their conversation held in preparation for the kickoff.

Lauren: This idea has come a really long way. Originally I overheard a comment, “this Volée team is so robust and beautiful, I bet we could run a relay from coast to coast!” That planted a seed, along with the question of “I wonder what we could do with that? How could we put that to a purpose?”
Then the 100th anniversary of womxn’s suffrage (the 19th Amendment) approached. It’s a complicated anniversary. It was a big deal, but it didn’t guarantee the vote for everyone. The stories are great, but I was disturbed by the exclusions of women of color, of womxn in the LGBTQ+ community. This presented the concept to me of white feminism. I saw it clearly in that history - the concept that the most “digestible” form of feminism would be good enough to accomplish some rights that would then “trickle down” somehow to everyone.
Turns out, it doesn’t work that way. There is still a struggle. I’d love to commemorate the 100th anniversary somehow, but how do we do that in a way that honors the complexity of the past and sets a standard and a new vision for the future? What about instead of celebrating the past, we put down a marker in time. What if we run across the country and we build a relay - and with every single part of it we work to symbolize what we want the next 100 years to look like?
Alison: We were given this beautifully crazy idea. I remember getting the email and within 10 minutes I said “yes, we’re going to do it!”. This goes back to our origins of Run 4 All Women, running from Harlem to Washington DC, over 1,000 people joining us along the way, and harnessing the energy around this idea of running and movement as a vehicle for social change. In the course of 60 hours, we ran over 250 miles and raised over $150k for Planned Parenthood.
There was also this connection to the Torch Relay of 1977. That was a massive run. The 2,612‐mile relay began Sept. 29 in Seneca Falls, where the first national women's convention was held in 1848. More than 1000 women participated and it covered 14 states. It was loaded with good intentions and symbolism: “Women on the Move!” Bella Abzug, Betty Friedan, Billie Jean King, Lady Bird Johnson, Gloria Steinem, and Rosalynn Carter were among the participants. And no one knows about it.
Lauren: When I learned about the original Torch Relay, and that over 1,000 womxn participated in it - the first handoff was to Kathrine Switzer - I couldn’t believe I didn’t know anything about it. They encountered the Ku Klux Klan, blocked off sections, counter-protests - it was legit. The whole point was to connect the original womxn’s suffrage movement to the modern womxn’s movement at that time. The symbolic passing of the Torch. They made efforts to be inclusive, but they were still fighting against the mainstream media that centered white womxn. How do we take what was amazing but imperfect in 1977 and reimagine it in a more inclusive way?
Alison: We came up with this idea of reimagining this relay event along the Civil Rights Trail. Something that allowed our communities to reconnect with such an important part of our history and also project into the future.
The other piece of our concept is voter registration. Voting is not built for everyday people...that’s intentional. We need to change that. I sent everyone our hype video: Yello Pain My Vote Doesn’t Count. “Every time you don’t show up to vote, someone else is happy you didn’t show up.” We decided to partner with Black Voters Matter - co-Founder LaTosha Brown will make you think voting is literally the coolest thing in the world.

Now you find us here with Womxn Run the Vote relay. We’ll be moving through space in our own particular geographies, but recalling the important history of civil rights, and seeing how the lessons that we learned years ago still apply, and how that can be channeled into voting and into the next 100 years of progress.

Lauren: There’s always going to be resistance. But what I love about the evolution of this idea is the idea of centering black and brown people, centering the civil rights movement, being really mindful of which stories we tell. The route matters. The cause we are getting behind matters. Womxn can come together for more than womxn, we can come together to fight voter suppression. The evolution of our feminism is critical at this time. Who do you center in womxn’s movements? Doing this kind of thing is hard. We have to do it as imperfect people. That’s pretty much the idea that I’ve talked about ...what a dream this would be to create a movement with movement...to inspire as many people to vote as possible.
I’m a white womxn. I love to dwell in the world of ideas and action. It’s not the time to center white womxn. How do I balance this powerful feeling of finding my voice and using it with the necessity of sharing the mic, handing over the mic, making space for other voices and being a cheerleader, empowerer...that’s been an unfamiliar role for me. It’s humbling for me, and I’m still figuring my way through it. To me this is the biggest learning opportunity with this relay, working in partnership on this relay is a real opportunity to put that to work.
Alison: I’ve encountered white feminism where my story and my truth, my reality has been side-lined. My journey is learning to reject internalized racism, internalized white supremacy. The beautiful thing about what we are creating here is it’s imperfect. It’s rooted in the principle of always learning, always trying to include more voice in the conversation, and trying to be gracious in that practice.
Lauren: I’m so excited that we are using running, this practice that we know so well as a frequent or daily practice, to do this work. As runners, we share a set of tools that we’re used to applying. We know we’re going to have good days, we’re going to screw up, we just need to put in the time. Participation in this relay is such a beautiful way to translate skills we already have. Runners know how to keep going, how to do a little bit every day. Civic engagement and anti-racism work are the SAME.
Alison: What does running mean to you? I think of running as freedom, but also as revolutionary. I say that as a womxn, a black womxn, as someone who when I go outside I’m always at risk of being profiled, assaulted, arrested. I think of the history of my ancestors and how the legacy of movement (marching, escaping) is tied into my identity. People sometimes say running is “just running” but we all know it is so much more than that.
Running is perseverance, clarity, transformative; running is subversive, release, breathing; all of those individual connections to running are what we bring to this collective movement. Although we’re all far apart in different parts of the country, that is really the glue that brings this movement together.
Lauren: By showing up for this relay, imperfectly as we are, we are making a commitment to engage in anti-racism work. The relay itself is set up so we will learn, act, and serve. We learn from history and one another as we run it. We act individually by putting our bodies and resources into it. And we serve by aligning our individual movement into a collective movement.
Alison: These are our principles:
We will learn as we go
We commit to this work as anti-racism work
We are not experts and won’t become experts, there’s so much we don’t know
But we will make a difference
We invite you to join us! 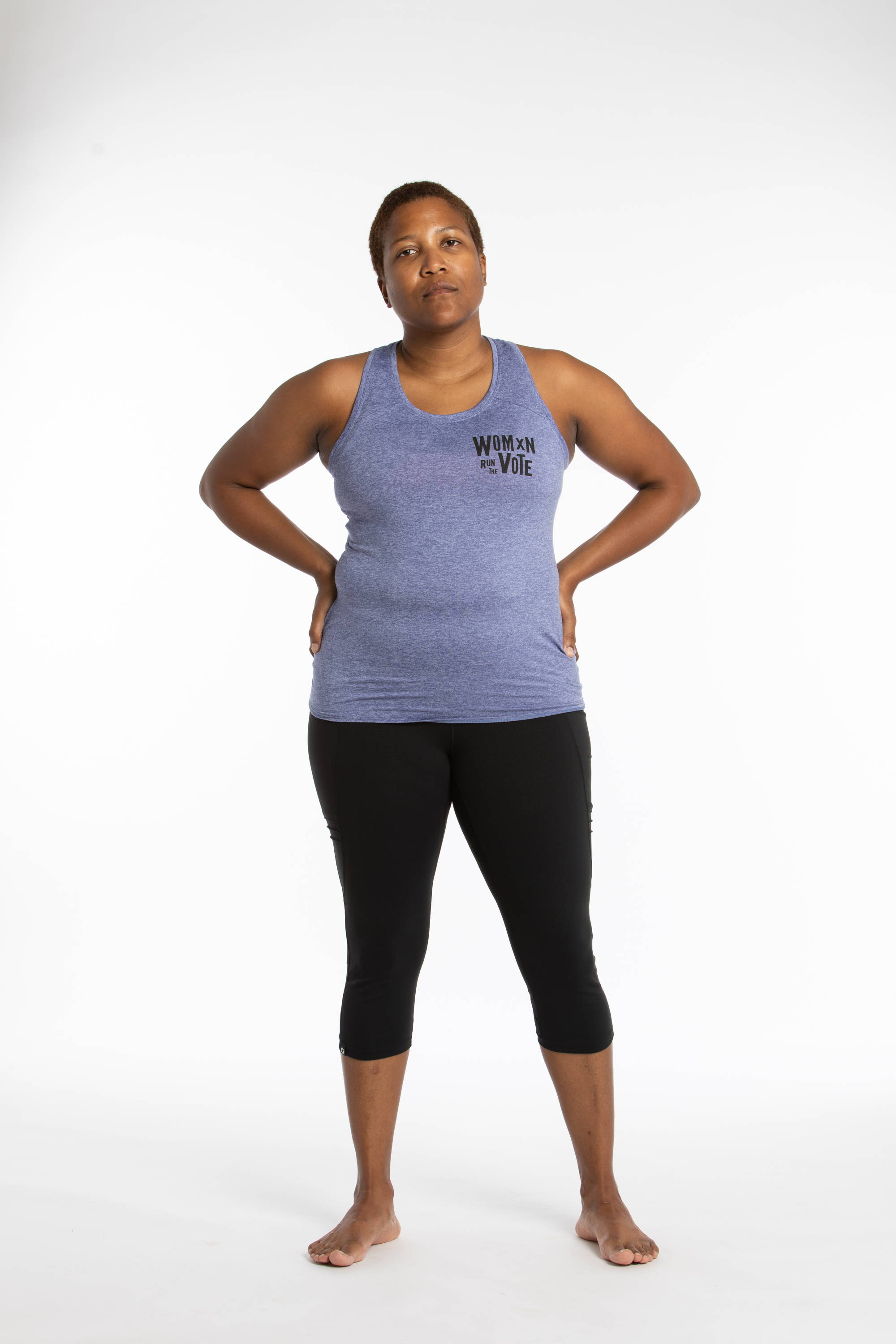 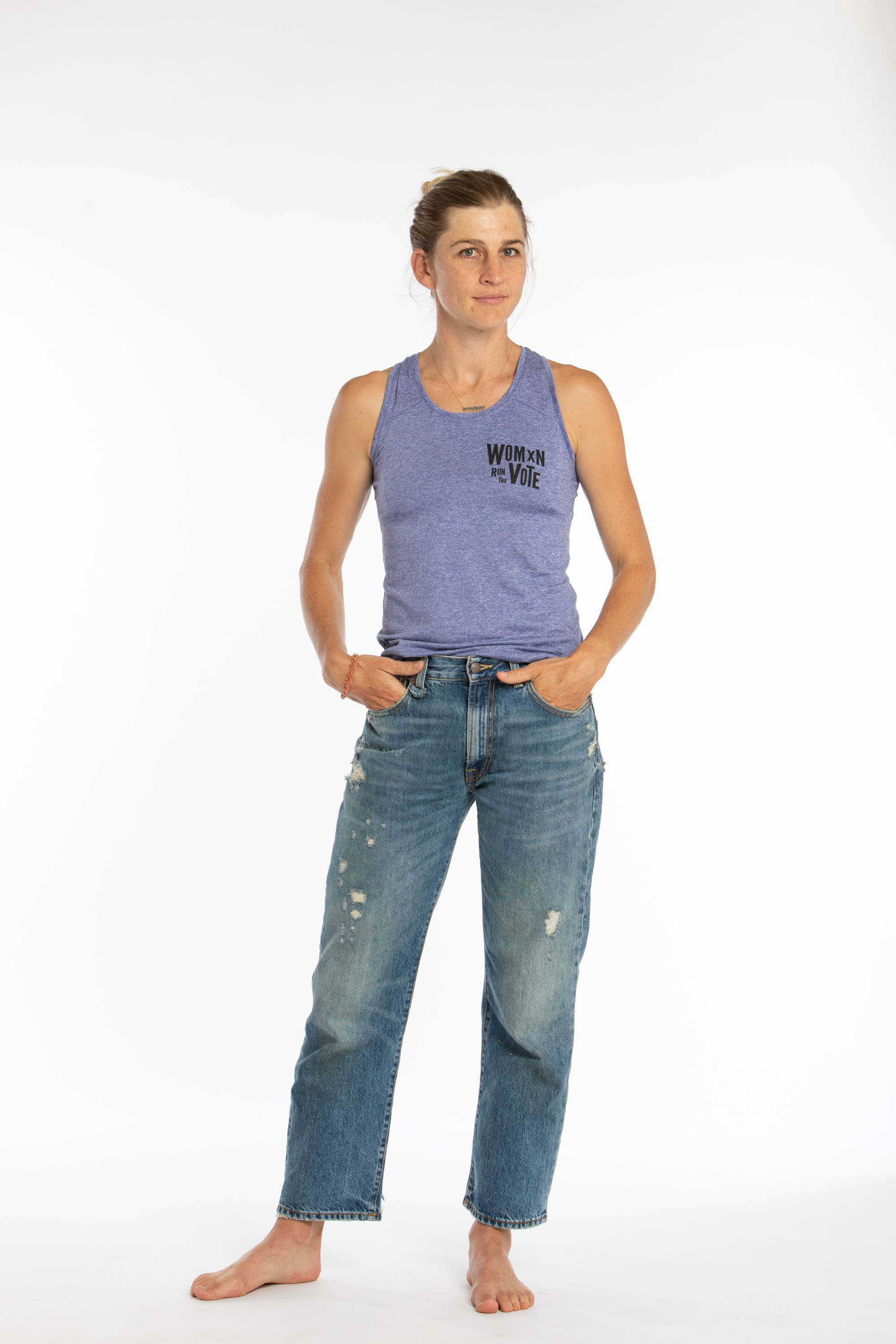 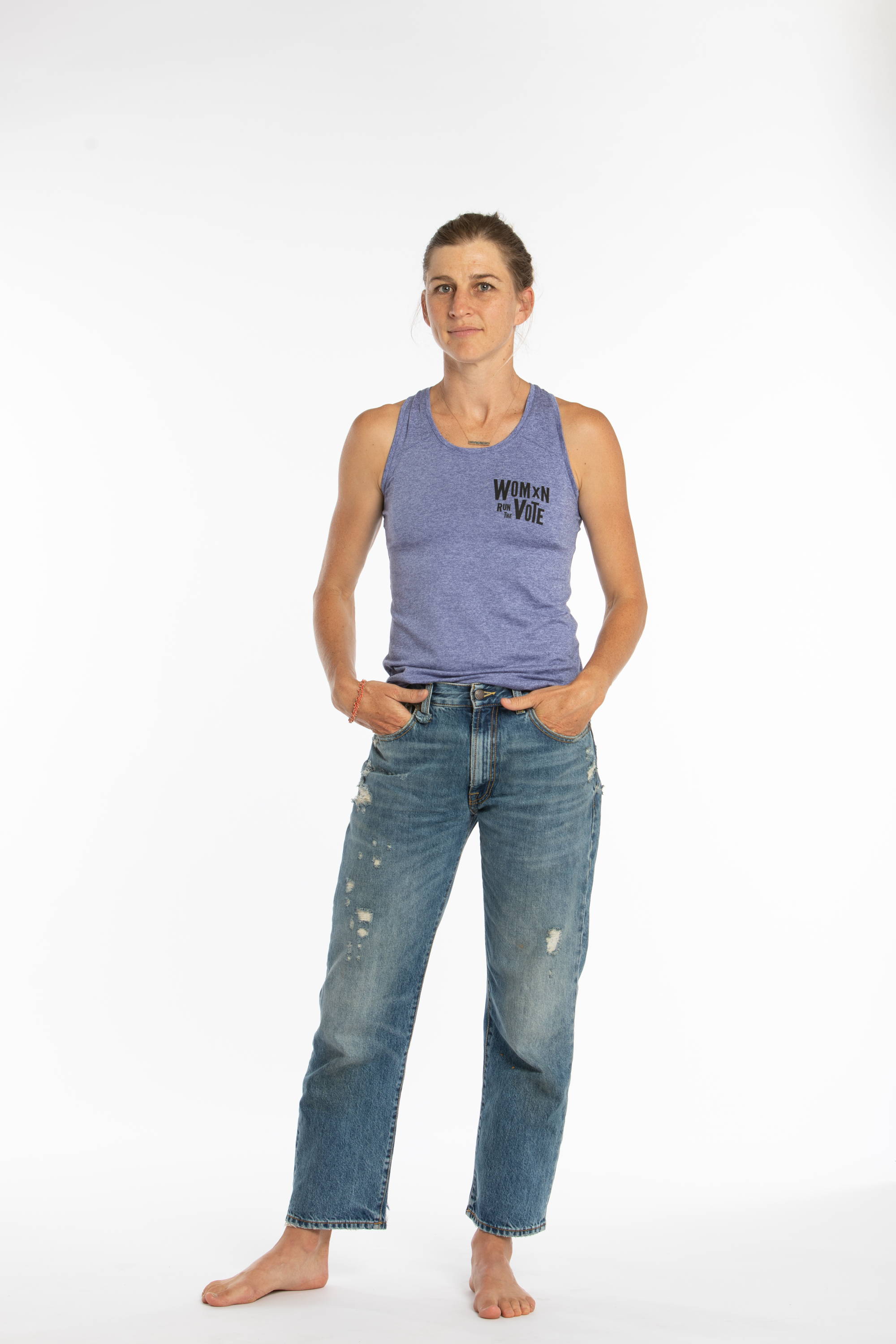 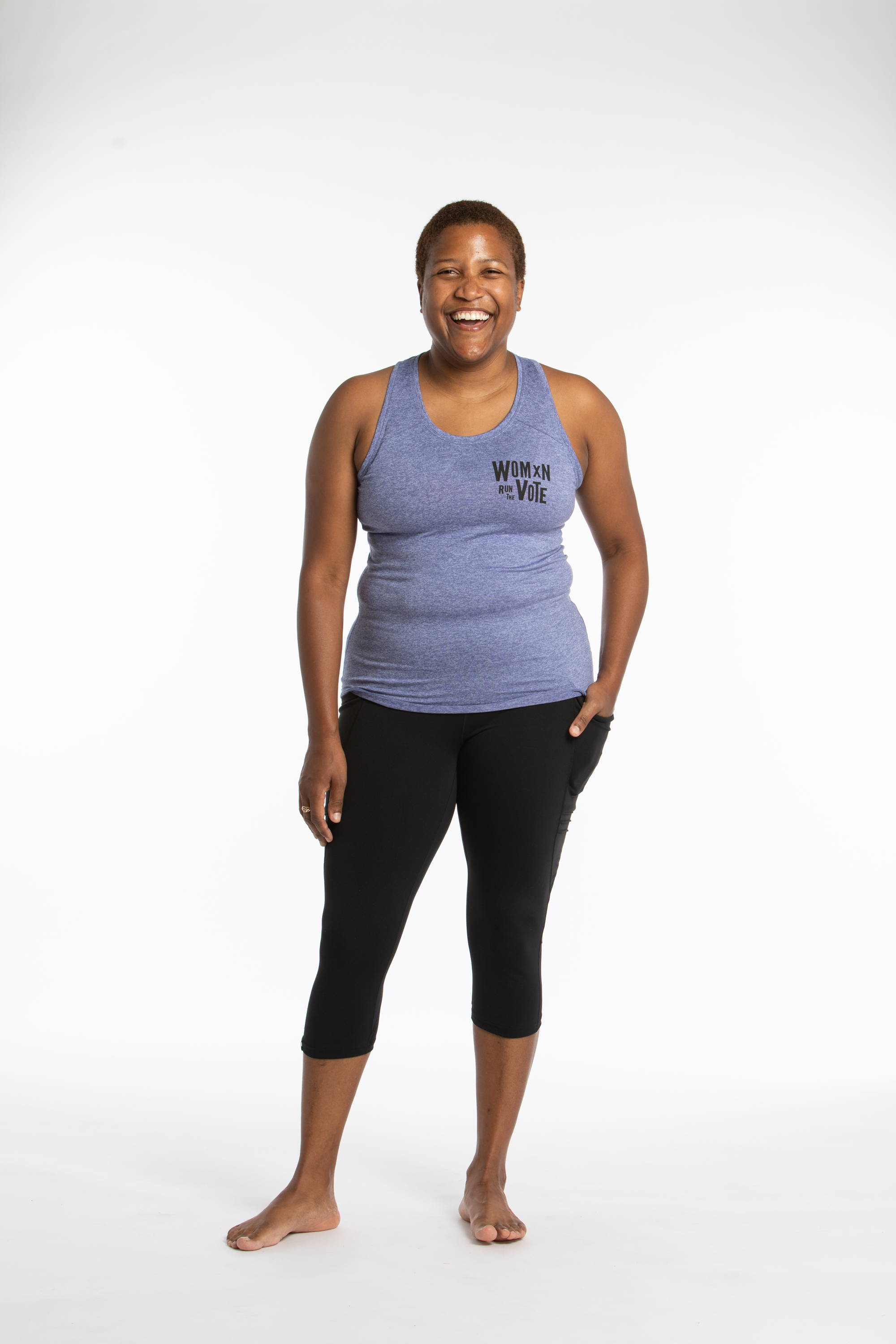