WOMXN RUN THE VOTE — MORE THAN A RELAY

What a journey! Beginning with our first conversations more than a year ago, to watching the relay play out online over the past week, to having our phones drain out their batteries with constant messages - our hearts are so full and our engines are revving! When we launched Womxn Run the Vote, we were excited, and also had no idea what to expect. How many people would sign up (would 2,300 gaiters be too many or too few)? How much money could we raise for Black Voters Matter (our first stretch goal was $100,000)? Would we be yelling into the void? Our official report: THIS COMMUNITY IS TRULY AMAZING!

Fundraising: With the addition of 20% of sales from the Womxn Run the Vote tanks, the total amount sent to Black Voters Matter = $270,620. This does not include direct donations to Black Voters Matter made before, during, and after the relay (get on in there if you haven’t already). The funds raised through Womxn Run the Vote will support BVM as they engage in their critical and far-reaching work; from bussing elderly voters to the polls to helping newly elected representatives in Washington create legislation that protects voter rights.

Participant Stats: Over the course of the week, 9,732 participants logged 401,838 miles total - that’s to the moon and almost home again!

Civic Engagement: All week, people shared their voter registration stories and takeaways from Keshia’s educational pin drops and mileage messages. Check out the >3400 #WomxnRunTheVote Insta-tags to be overwhelmed.

Press and Highlights: We have been very gratified by the interest in this “Torch Relay 2.0.” After internalizing the hard-to-find history of the forgotten-by-most 1977 Torch Relay, one of our goals for Womxn Run the Vote was to create a searchable record so history can hopefully move forward instead of repeating itself. Each of these features has a slightly different focus; the storytelling is powerful!

For more backstory, historian Amira Rose Davis in conversation with Lauren Fleshman and Alison M. Désir on the Burn it All Down Podcast is not to be missed. Amira studied the 1977 Torch Relay and also advised Lauren and the Womxn Run the Vote team in the early stages of planning, pointing out potential missteps and ways to improve the coalition.

On National Voter Registration Day, September 22nd, Black Voters Matter Co-Founder LaTosha Brown and Run 4 All Women Founder Alison Mariella Désir discussed voter suppression, the mission behind Black Voters Matter, and how to keep going every damn day. You need to read the transcript and watch the video, but this is just one of LaTosha’s gems:

“Part of the problem is folks’ disconnect around voting, because there's been an intention by many people in this country to disconnect folks from feeling a sense of power. They just want you to be a proxy. They want you to just show up and go on about your business, right? Hence, the situation that we're in right now. Fundamentally our work is when we're telling people that “you matter.” And because you add up your agency, you have agency and you have power… and you demonstrate your power to force the leadership, to force those around you to be accountable to what it is that you want in your community.”

Something That Made Us Cheer: We were collectively devastated 3 days before the relay started by the death of Justice Ruth Bader Ginsburg. With the current administration pushing to force through a 3rd conservative judge prior to the election and women’s rights on the line, it is hard not to feel powerless. Then Courtney and Emily led this powerful demonstration letting #45 know that he was not welcome at RBG’s casket - and that his policies will have consequences in the election. Courtney tweeted: “Here’s the video footage...right up front wearing my @oiselle vote top, screaming my head off, shaking my fist. Will it matter? No. Did it feel good? Yes. Will I keep pushing, donating, marching and VOTING? Yes.” But we beg to differ - it mattered to us! Thank you.

Call to Action for the Next 35 Days: Let’s keep this energy going - every day do one small thing to increase voter turnout. Our collective action makes a difference. And you can keep the vibe alive with DJ Sed’s awesome Womxn Run the Vote playlist while you work! 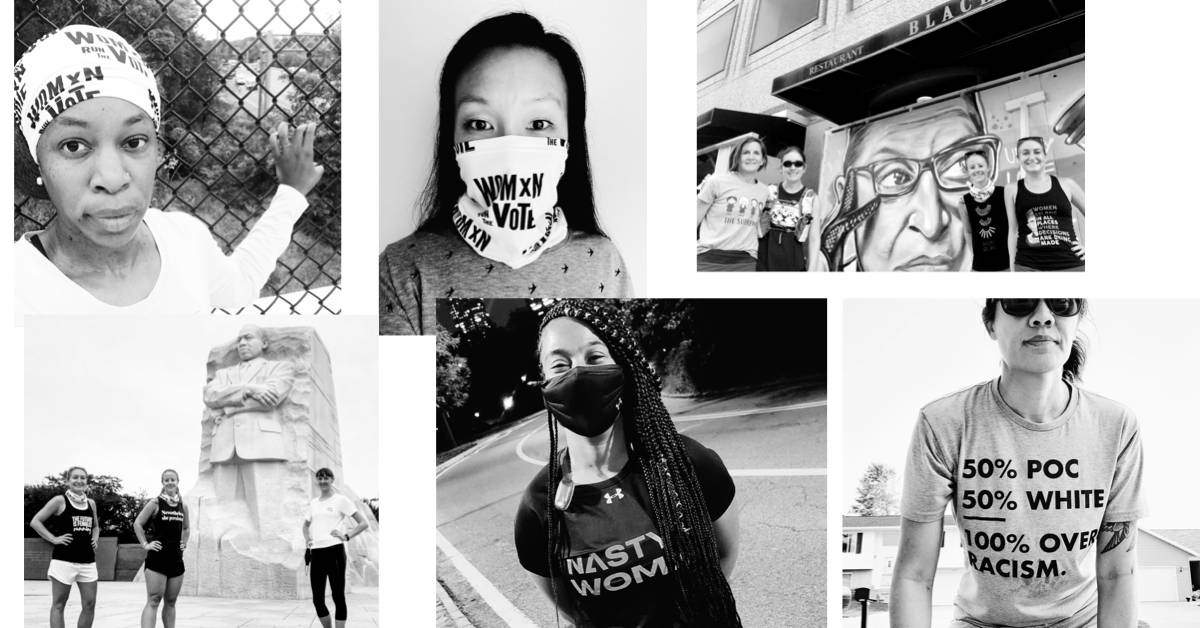