Mountain Bike Racing is For Every Woman

Imagine a typical start line at your local running race. What do you see? Volunteers corralling the nervous racers to the start chute, long lines at the porta potty, spectators and family giving high fives to their friends/loved ones.

Have you ever paid attention at your local 5k to see how many males to females there were? Chances are, it was a pretty even count and it didn’t even cross your mind. If the ratio was 81% male to 19% female, you definitely would have noticed. This is the average percentage for most of the mountain bike races I have participated in around Utah. 19% female. And even that is considered a good turnout. 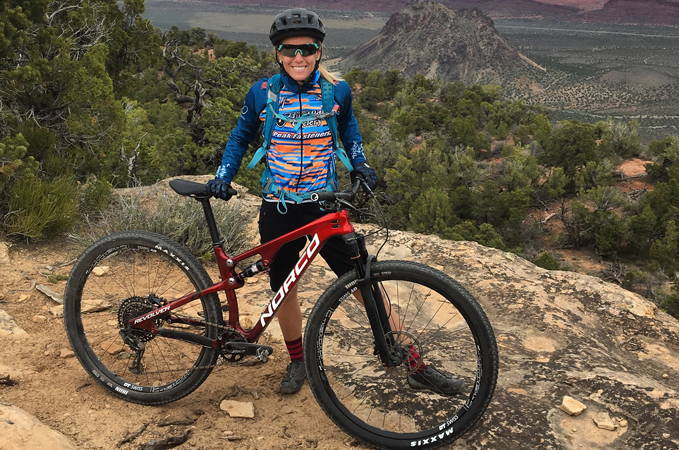 I began mountain bike racing a few years ago as cross-training for trail running. I quickly became one of the top women in the sport category and loved this new and fun challenge. Aside from my newfound love for this sport, I began to experience several concerning instances that involved the (older) opposite sex.

The women’s sport category was usually one of the last to go during these races. Being in the lead pack often meant catching the groups in front. These groups consisted of older men who were not too excited when women politely asked to pass them on the trail. Some would just ignore the request to go around while others would mutter rude things under their breath when we were finally “allowed” to pass. Being a mountain bike newbie, I didn’t think too much about this until it happened again, and again, and again. What was the deal? What did we do to deserve this cruel treatment? Was it because we were female? Was it because they didn’t want to feel weak?

I asked these questions over and over in my head and instead of having an “ah-ha” moment, I just got more and more frustrated. I came to the conclusion that mountain biking was a “men’s” sport and that I was not welcome. I did end up winning the women’s sport group that year and was asked to move up to the pro/expert group for the next season. Aside from being absolutely terrified to race against some super strong tough ladies, the rude encounters on the trail pretty much stopped. Racing in this group moved me up in the start corral. We took off after the expert men and the trails were smooth sailing. It felt great not having to stress out over passing the old guys. All of my previous frustrations were no more! Fast forward to the beginning of this year.

My husband and I signed up for a 50-mile mountain bike race on tough, punishing terrain in southern Utah. I was nervous but psyched for the race. I started in the women’s pro/open category which took off right after the men’s pro/open. All went smoothly the first few miles until the fast men from the groups behind started to catch up. I took a loose turn too fast and ended up crashing on my side. A few of the fast men behind me jutted around and didn’t even bother to ask if I was okay. One even said when he rode by “Are you f*$%ing kidding me?” I was annoyed but kept pushing on. The technical part of the course came a few miles later. I was riding these spots cautiously because the consequences outweighed the benefits. I had another older man come up on my wheel and YELL at me to get out of the way. At that moment, I was completely deflated. I wanted to quit right then and there. I wasn’t sure what I had done to piss these guys off, but I was just plain done.

I rode through the first checkpoint at ~25 miles and was trying to hold back tears. I heard a familiar voice behind and saw my husband riding up to the checkpoint. He knew something was wrong but convinced me to keep going. He assured me that these old guys weren’t worth crying over. They were not thinking straight and let stereotypes cloud their judgement. They probably felt that women should not be allowed to start in front of them. I ended up riding the second half of the race with my husband and was grateful to complete the challenge.

I spoke with several women competitors after the race and found out that they had similar stories. One woman was almost run off of a cliff because she didn’t pull out of the way fast enough. Another woman was called a “bitch” because she was in the way trying to find a safe spot to pull over. And I thought I was the only one. I wanted that sense of relief but hearing their stories made me angrier than I already was. We all agreed to email our stories the race director (who is a woman). She promptly responded to all of us with praise and thanks. She promised us that next year a “zero tolerance policy” would be put in place; rude or disrespectful incidents will result in immediate disqualification, no questions asked.

I was excited for the change but had to wonder if this is just part of the inequality in mountain bike racing. Were other women experiencing the same things as I was but instead of taking the high road, they just gave up the sport entirely?

I finished this season on a positive note pushing through this adversity to do what I love. My goal in sharing this is to shed light upon the situation. I hope this encourages others in similar situations to speak up. You can make a difference! Hopefully each small step will improve women’s participation and enjoyment in the sports we love.