Inspired by the engineering of suspension bridges, the Sisters Bra is designed for maximum security, support, and coverage at all points. The name alludes to the sisterhood in its design: two layers of construction working in harmony. An inner layer, which includes unique meshes and molded cups, while attaching those elements to an inner set of straps. This inner layer = encapsulation, supporting each breast. The outer layer and outer straps represent the compression, holding everything in place. The four-strap system more evenly distributes the weight, relieving strap pressure which can often cause pain or welting in the skin. The Sisters Bra is also higher on the neck, to minimize top bounce, with the two layers of mesh at the neck serving both form and function.

Learn more about the Sisters Bra on the blog.
.

Like many of the reviewers, I've been searching for a sports bra to replace the Juno model from Brooks Running / Moving Comfort. I was a bit intimidated by the description of the Sisters Bra - but I am sold on it after my 10 mile run. I'm 5'11, 152 lbs and have the 36C. It was easy to get on and felt snug - but not tight - and comfortable. I didn't experience any chafing or rubbing and didn't feel like I was bouncing. I will report back if the bra disappoints after a few more uses but so far I am impressed!

I'm a generous 36C and like almost no movement when I do high impact sports. I just bought my fourth sisters bra, so I figured it was time to let Oiselle know why I like it!
Pros: higher neck, modesty pads that don't fly out in the wash, low / no movement during running or tennis. I also like how the bra looks and how I look in it. It's also constructed in such a way that my girls are high, front and center, if that makes any sense. Straps don't dig. It's a well engineered bra.
Cons: not easy to get on. Shoulder flexibility is an issue for me at the moment, so I just close the hooks and struggle into the thing. However, once it's on, I am ready to go!

I am still trying to find a replacement for my Brooks Juno/ Moving Comfort and I thought this would be it. There is just not enough adjustment in the shoulder straps to really feel like I am being supported and held in place. Sadly returning this and will still be looking.

I normally don't write reviews, but I was raving about this bra to my running buddy, and decided this might help other women runners with larger boobs.

Like a lot of other reviewers, I am a D+ cup and my favorite bra before this was the Brooks/Moving Comfort Juno. I've tried some of the intense front zip bras, and they felt like a project to get on the boobs with out parts shooting out. Sometimes the Juno would feel a little too tight going on pre run, like I couldn't fully breathe.

My Brooks Junos are a little tight on me now, and I have found salvation in the Sisters Bra. I wore it on a run in Seattle, and came back soaking wet from a rainstorm, I mean, like I had jumped into the Puget Sound wet. The bra stayed in tact and amazingly, there was no chafing. I also wore the Long Pocket Joggers on this run and they held up amazingly. No chafing or falling down.

When I first put the bra on, I was afraid it might not be supportive enough, because it was so comfortable. Like the other reviewers say, the strap adjustability is clutch. I also found the mesh did not completely hold the boobs down, but it is nice to have for modesty.

I just bought two more, and I would recommend for others. THIS is my new go to bra!

Ran my first longer run in this bra today - 8 miles. There was a slight bounce so I wish there was a little more compression. However, my breasts were not sore and I did not get chaffing like I have with other bras.

I have been looking for a new favorite bra ever since Brooks got rid of their Juno and replaced it with their new (less supportive bra line) I think this Oiselle bra has the potential to replace the Juno for many women.

LOVES about this bra:
** the high neckline -- I really appreciated that
** the double straps - I feel like this helped to distribute weight and pressure.

IMPROVEMENT ideas:
** I would love to see a wider band. Right now it is 2x2 (2 hooks across and 2 hook tightening row options). I think aa HUGE improvement would be to widen this to be 3x3 or 4x4 to provide more tightening and adjustment.
** I would love the shoulder straps to have the tightening ability of the old Brooks Juno (it was a velcro that you could adjust while the bra was on). Right now, with the Oiselle bra you have to adjust the straps when the bra is off, which can make it difficult to truly get the most supportive fit,.
** Wish it was a little more compression - this could be something about the fabric or it might be solved with the improved hook idea above

I am really excited about this bra because the search for the right sports bra is a forever struggle! I look forward to future versions! And I would be more than happy to provide feedback if it helps make the bra work better for supporting the ladies! Thanks, Oiselle!

I thought this might be THE ONE. It turns out that it’s just as disappointing as all the other bras I’ve tried to tame my girls. I’ve always doubled up bras to provide support under my boobs and on top. This bra provides lower support, but very little on my upper chest. The inner bra is loose in comparison to the outer bra and the pads stick out. If I tighten it up, the bottom band rides up to the underside of my boobs, the inner bra becomes looser and more wrinkled and it’s very uncomfortable in the shoulders. I wish I could find a bra that holds my chest down as opposed to just pushing my boobs up. 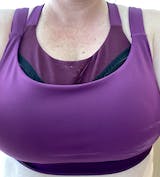 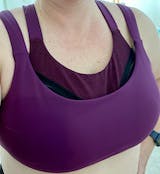 I'm a 34DD, and always on the hunt for good sports bras. The style of this bra is great. I love the way it looks. It's a little tricky to get on if you aren't dexterous with hooking a bra in the back, and I wish it were easier to turn to hook it in the front when putting it on. I was a little disappointed in the support. I don't feel locked in enough to use this one for running, but will use it for everything else. Thanks for venturing into banc/cup sized bras for us busty gals!

I had high hopes, but I really needed the inner bra to be adjustable. The straps were so short, I couldn't pull down past my collar bone. I'm 5'10 and too long torso-ed for this bra.