The Queen Bra has a deceptively simple design aesthetically – but still includes all of the internal construction that makes it a highly supportive, structured bra. It includes molded cups with perforation for heat release, our unique padded and stable shoulder straps, adjustability in both the chest band and the straps, as well as an extra plush and ribbed chest elastic that forms the foundation of the style. Its body fabric is Power Plya™ Compression which is smooth, durable, and includes a high Spandex® content for stretch and recovery.

Learn more about the Queen Bra on the blog.
.

Wore it first time for an 8-mile run without issue. I prefer a racer-back and only buy bras that clasp in the back - so putting this on even with the straps crossed was reasonably familiar to me. At 34C the size was spot on and the support was greater than medium - but not high impact. The fabric is buttery soft and feels great, though I fear it may be too hot for summer (we'll see). Overall, a good sports bra, but not my holy grail. I would prefer a true racer-back and straps that adjust in the front. And I had one issue - I didn't care for the fact that scoop neck created a visible seam through my shirt. Did anyone else experience this? So - while I am sure I will get good use of this product I probably wouldn't buy another. Sadly I had found the perfect bra but it has been discontinued - so the search continues. I will be keeping my eye on future entries from Oiselle.

I've been waiting for Oiselle to come out with a larger size bra and I'm so glad they did. I'm a 38G and wear a 38DDD high impact bra, which gives me side boob. I hate side boob especially when wearing a tank top.

This bra in 38DD fits me and while it won't work for high impact workouts for me. It will work for weight lifting at the gym and there is no side boob. It's so comfortable I may wear it under t-shirts at work too.

The bra cups felt great, but the band size is at least 1 if not 2 sizes off. I was really hopeful to find a replacement for my beloved bra that’s been discontinued but this is far from it. Might fit a 32G.

I wanted to like this, but ultimately returned it. The positives:
Sizing! The measuring instructions were perfect, and the sizing was spot on.
Support! Lots of it.
Style! The birds on the convertible straps, and the Queen colorway.

Negatives:
The four hooks on the band were overkill for me, esp since I'm 5'2" with a short torso. The clasp has plenty of padding, though, so it doesn't feel like they'll dig in at all.
The padding isn't removable, but is its own layer underneath the outside layer. It was pretty thick, and it felt like the girls were wayyyyy out in front. It also shifted around, and I had to work to get the inner layer to not peek out from the outer layer, and I noticed some bunching of the outer layer.
Straps adjust in the back, which is not ideal, especially when you've got the straps in the criss-cross position.

Bottom line:
Good, not great. At full price, it needs to be perfect for me to keep. Going back. What I really want is something like the Flyout bra, just in a size that will fit me. Until then, it's back to the big box for my cheap but acceptable bras.

T
T.
The first sports bra I can say that I LOVE!

I LOVE the queen bra, which I don't think I have ever said about a sports bra in my life!  I like the simplicity, the band is wide and feels comfortable but doesn't ride up, it allows just enough movement to be comfortable but doesn't allow excessive bounce. I am a 38D, so need compression but don't want to feel like I am running in a corset. It was easy to put on and take off. I sweat a lot on my back, so I love how open the back feels.  It is a great silhouette and is flattering under shirts, it did not create the boob shelf you often get with sports bras. I love this bra.

Buttery soft, supportive, and easy on - easy off. Queen feels like a soft hug with all of the support of any maximum support bra. At a 36DD, I rarely find bras where I feel supported and held in place, but queen does it just right!

Also, I love that it has the convertible straps - what an even better plus!'

I have been waiting for Oiselle to come out with a bra for larger chests.I decided to try the Queen bra as I liked the one set of straps that could be changed directionally. I am a 36D so I need maximum support . I try the bra today. The strap is on the loosest possible which is fine as each month usually a bra loosens so it fits well. The material is super soft and comfortable. I feel no seams or any type of irritation. I am loving this bra. The color lapis is gorgeous and I have been wanting a blue bra. again, having a larger chest the options for colorful supportive bras are few.
I will definitely be buying this in another color.

A
A.R.
The best sports bra

This is such a great sports bra! The padding all around leaves no pressure points, and it's secure without being restricting. I am wearing my everyday bra size (38D) in the queen and it fits perfectly. 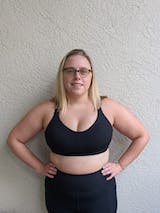 Product has been added to your wishlist.
You can view your wishlist by creating or login account.
Please create account through ##customer_email## email
Login Register
4