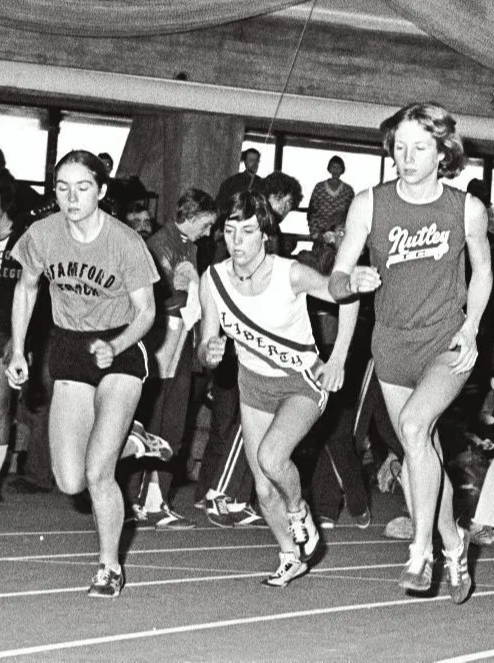 FIRST AND OLDEST WOMEN-ONLY RUNNING CLUB IN THE UNITED STATES

Liberty started in 1948 as an athletic club for girls in a variety of sports, though running was the main focus. The club began scheduling meets for girls in the New England area in the early 1960s, to increase A.A.U. Olympic Team development.

As the running boom of the 1970s and 1980s hit, Liberty attracted more of New England’s top female runners. Passage of Title IX in 1972 began to increase sport opportunities for women and girls across the country, but new programs don’t pop up overnight, and Liberty had already been around for decades. The club continued to train girls for regional and national meets, and older competitors began to join as well, creating two divisions within the club: youth, and high school and beyond.

“We were often a juggernaut of the best kind and there was nothing better than cheering on a fellow Liberty runner,” said Lynn Jennings.

It was in the 1980s that Liberty membership began to change again, first as more adult women began to join (many were mothers of girls in the youth program). Then, as girls’ and women’s sports programs around the country established themselves, Liberty’s programs were not as crucial. Add to this athletic companies wooing away elite women and Liberty’s dominance on a national level wained.

Liberty’s membership is now not only multigenerational but boasts a fierce and fast masters team which includes Mary Harada (three world records in her 70s) and Andrea Hatch (35 consecutive Boston Marathons). The youth division closed in 2011, but the club runs on.