In the first year or two of the nearly six I spent here at Oiselle, I would respond to that question with precious earnest. Now, I have to mentally trudge to the Well of Social Duty, cursing the insipid question while searching for a response. The question shares emotions with when did you realize you were gay? If I need to stall to think of something new and clever to say, I coyly thank the asker for using the word boy. I’m thirty-five and delight in not being called a man, as if it’s always a compliment to my ever-fading youth.

“It’s great. I like women better.” That’s how I answer now.

Let me tell you a laughable attempt of me trying to be a better man thing, a better representative of the male sub-species. In an enlightening conversation with my sweariest friend (a woman, of course), I conceded I used the word “bitch” too much, and that meant I shouldn’t use it at all. My dilemma was that I used it like I did with my gay friends, calling each other bitches and fags playfully, because only with each other were those words powerless. My infinitely wise decision was to call everyone a dick, regardless of gender. After maybe a month of disappointing reception to this delightful appellation I was so proud of, I realized that women are so regularly assaulted with every nuance of insults, my “dick” had no effect. So if after the first few of these paragraphs you thought I had achieved perfect feminism here, I can tell you there’s no such thing. It’s a direction, not a state of being, and I just try to keep running the right way.

“But what’s it like? How did you get picked?”

I was in burnout. My job at the time was draining me of time and all the good emotions. I’d been on a years-long hiking stretch, but I got to the point I’d do a ten-miler and wouldn’t remember or enjoy any of it because I was imagining dramatic work scenarios the whole time. I switched to running, my old high school sport I’d only done lightly in adulthood because I didn’t want to accidentally run off all the muscle I was making zero effort at building.

My previous boss, Robert, had started nudging me about coming to work for him at one of the companies where he did CFO consulting. Here’s how an accountant sells a job: “You were a runner, right? Well this woman started making running shorts in her garage—not poofy ones, they fit well—and the company has grown to the point where they just need someone who can do all the accounting stuff.” I asked Robert why he was trying to get me to leave my job working for a publicly traded company to go work for someone’s Etsy business, but eventually agreed to interview.

If pretty much any other straight man had told me he was working with a group of women runners, I would have rolled my eyes and dismissed him as someone indulging in a fantasy he should replace with therapy and/or a better moral fiber. I have one story about Robert I never tire of telling. When we worked together the first time, rivaling executives hired this deplorable shell of a human to eventually displace Robert. This guy—let’s call him Mort—was slimy as a cartoon villain. Within a day of meeting the team he’d purportedly supervise, he was loudly insulting his wife and kids and I was polishing my résumé. Poor Robert had to go to lunch with him and listen to Mort moan about his wife who would never be better than a supermarket greeter. I wasn’t there to see it, but I can so vividly picture Robert as he shrugged and said he paid for his wife to go to law school and now she made more money than him. Yeah, Robert's feminist skills were a little sharper than my “dick” jabs. Mort was shortly fired or thrown out with the garbage, I can’t remember.

I’d have to tell a dozen more Robert anecdotes to substantiate my appraisal as non-asshole straight dude, as one of the good ones. So when he told me Sally was brilliant, creative, and strong—okay, I waited to hear him say it twice or thrice—I eventually believed him and agreed to meet her.

I live for the stories people tell of their first meeting with Sally, especially the many (majority?) of her being spectacularly ordinary, gleefully recounting her weekend long run where she literally shit her pants and still had miles left. But I never had that story. I got the one you all wanted. I wasn’t familiar with Oiselle styles yet, but she wore a sleeveless top and capris that would easily be featured in top athleisure/biz casual look books. Maybe it was the go-anywhere outfit, or maybe it was the go-anywhere attitude Sally has, but I appreciated her impressive figure. She walked me from Oiselle’s then tiny Green Lake office to a sunny outdoor courtyard. I remember noticing how Sally carries herself. It’s so real. She has no swish or swagger, no bullshit I’m-a-woman-CEO-who-walks-like-a-man bravado. Hers is the walk of a strong runner: efficient, practiced, and dangerous. 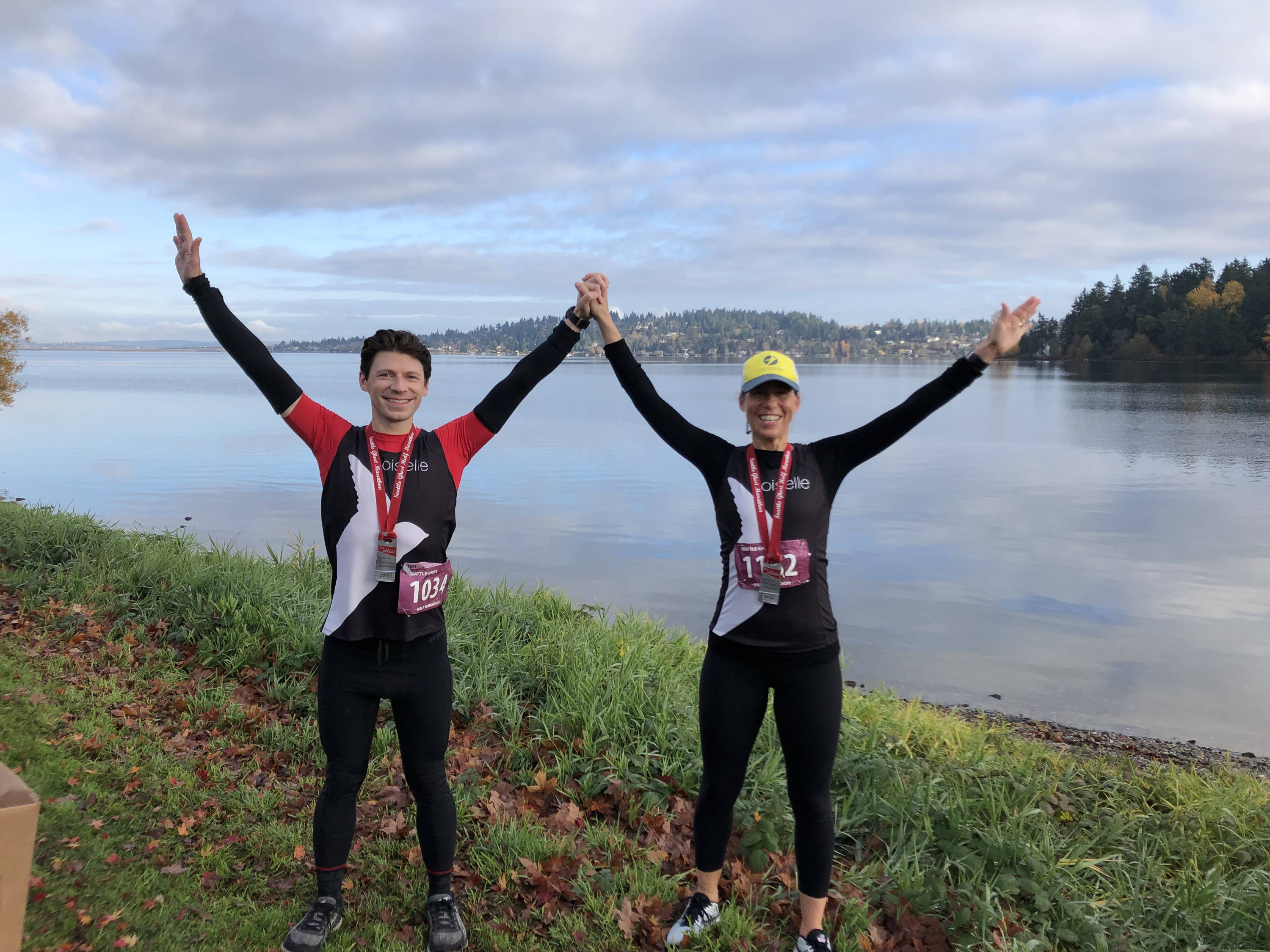 Robert must have tipped off this leader of an all-woman company that my homo ass wasn’t a masculine threat, but Sally knew better and definitely noticed how I sized her up. As we sat in the courtyard and she skillfully tested my experience and enticed me with the story and passion of her company, she’d arranged—I fucking swear she must have—a never-ending parade of shirtless runner dudes to attempt distraction behind her. What a clever test she’d staged and still denies. My respect and employment was hers.

I’m the wrong person to ask because it was so easy for me. I grew up with women, as did all of humanity, but when you feel like part of the Other crowd—the same crowd women are somehow a part of despite their statistical majority in the species—you might feel a certain bond. My coworkers were like sisters who let me help build and play in a secret treehouse. We might not have posted NO BOYS ALLOWED, but it’s clear to the world we live in a feminine stronghold. In Margaret Atwood’s Handmaid’s Tale, LGBTQ people are labeled “gender traitors.” I imagine our treehouse vandalized with that title spray-painted on the walls. We’d probably shrug it off and turn it into a rally cry. Like, fuck those guys labeling us, blocking or stripping us of rights, underpaying, unrepresenting, and raping us, then shielding themselves with Brett Kavanaughs. We make our own rules and rule ourselves. It’s a pretty cool treehouse we live in. 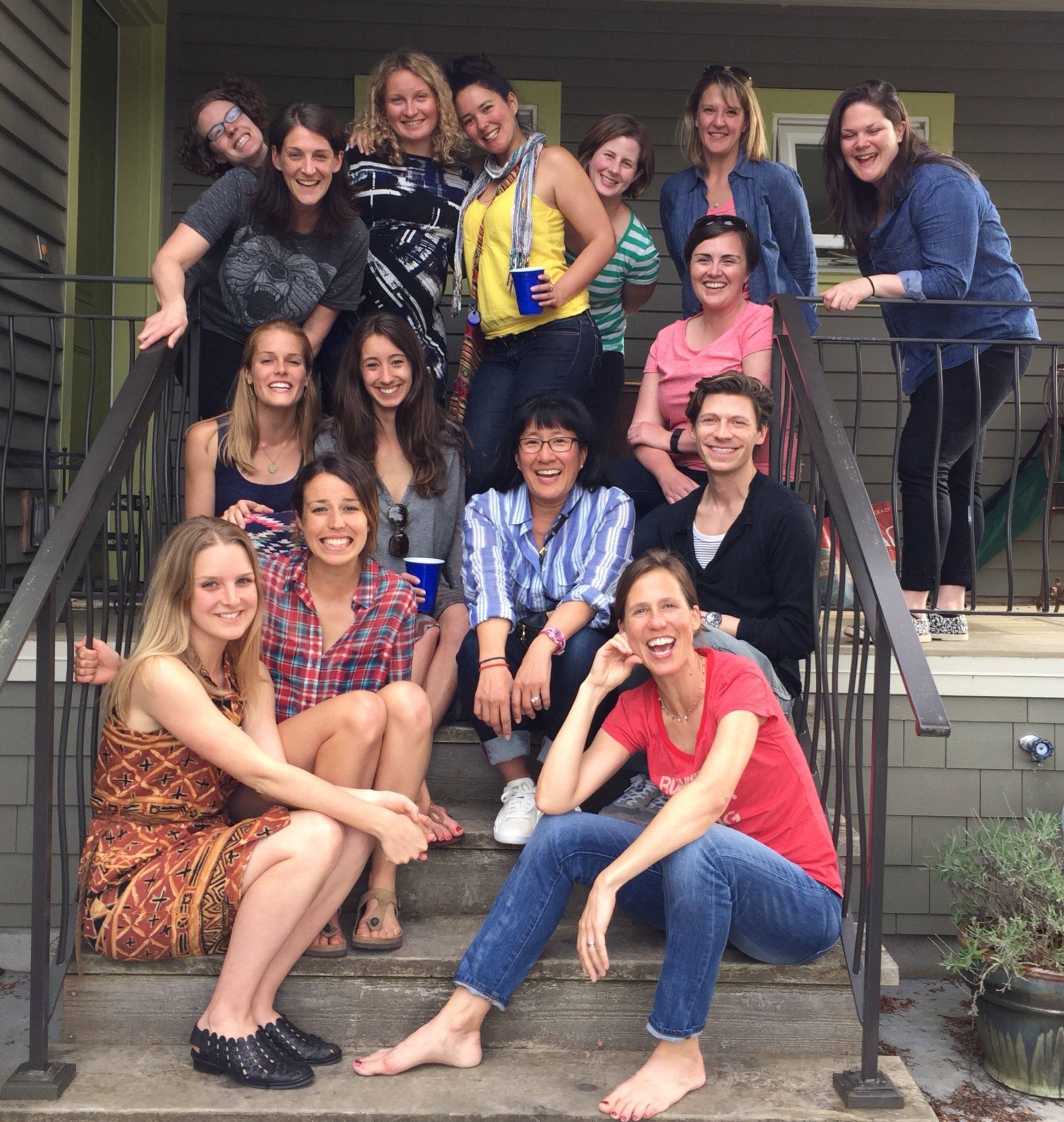 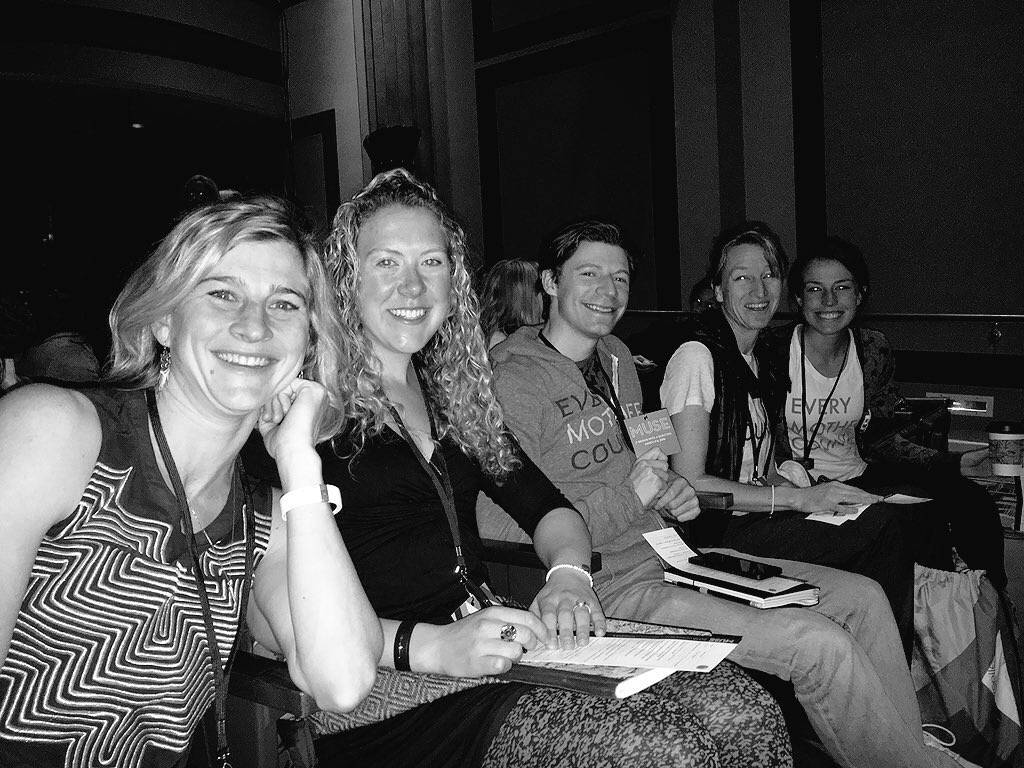 When Ruth Bader Ginsburg was asked how many women should be on the Supreme Court, she famously answered, “Nine.” I think of that when people ask if I’ll be replaced with another boy, or if more man things will join the Nest. There’s no need for male presence here. If the right dude comes along, sure, but I really believe in the power of sisterhood. I remember in my early twenties when I first started going to gay bars. God, it felt so good inside those safe spaces. I didn’t have to excuse my behavior or hold anything back. Women need those spaces too--they just fucking need space everywhere. They need the Nest, the Bird Camps, the Wilder and Podium retreats, the Muse conferences. If we ever get a world where one man in a crowd of women doesn’t seem remarkable, that would be a very good world.

So, my obviously rampant feminism aside, I got to be fully me for six years at Oiselle. I’m so lucky to have such a long stretch of my life where I had that freedom. It’s more than what I had in high school when I didn’t feel safe to be me, or in college when I tried too hard to be me, or in my early career when there was “work me” and “diminishing me.” I will thrive because of my time here, because of how comfortable I learned to be for so long. I don’t have Sally’s formidable gait, but I found my own stride, the way everyone here does.

I’ll keep my head up, my wings out, and I’ll always be proud to be part of the flock.