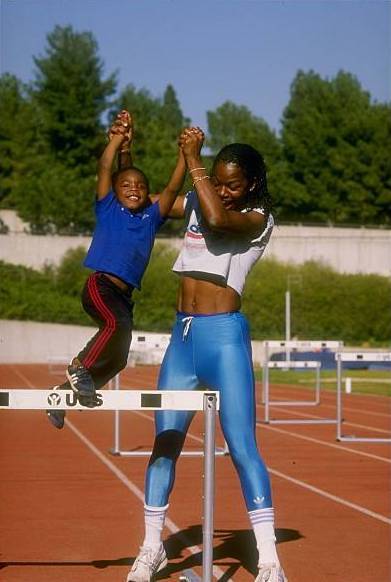 Valerie Brisco-Hooks was born on July 6, 1960 in Greenwood, Mississippi, the sixth of 10 children. Mom, Guitherea, was a teacher, and dad, Arguster, was a metal worker. The family moved to the Watts neighborhood of LA before she entered elementary school.

Three of her older brothers were standouts in track at Locke High School. In 1974, brothers Robert and Melvin were running a workout at the school track when Robert was stuck by stray bullets from nearby gang violence. The track was dedicated to his memory not long after.

As soon as Valerie entered high school, the track coach added her to the roster, without asking her first. (“Suppose he assumed all Briscos could run.”) But run she could, and got noticed by UCLA women’s track and field coach Bobby Kersee at a meet in 1978. “I had never seen such feed turnover that fast for anyone her size. Valerie had speed, raw speed.” She joined his World Class Track Team, and practiced alongside Jackie Joyner-Kersee and Florence Griffith-Joyner.

In 1981, Valerie married Alvin Hooks, then a wide receiver for the Eagles. Alvin Jr. was born a year later. Valerie took a year and a half off from training, missing the 1982 track season completely. Self-doubt was a frequent teammate while she and Coach Kersee worked together toward the goal of Olympic competition. But in the run up to the 1984 Olympic Trials, Valerie ran personal bests in both the 100 (11.39) and the 200 (23.1).