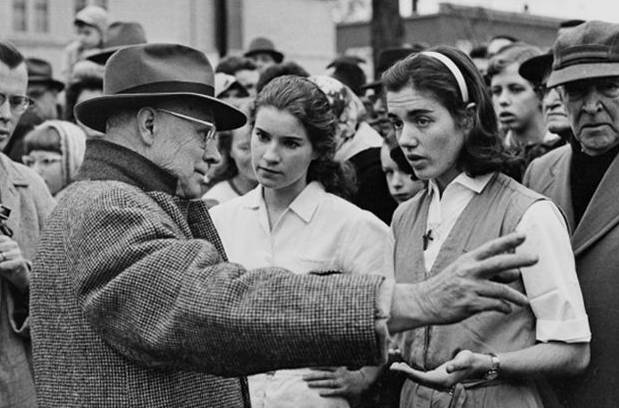 TRAILBLAZER FOR WOMEN'S RUNNING IN THE 1960s

Julia Chase-Brand was born in 1942, and spent a lot of her childhood time outside: running around on her grandmother’s farm in Groton, Connecticut, playing team sports with her four brothers, and occasionally canoeing through a marsh on the way to school.

On their way to daily Mass during Lent in the mid-50s, Julia and her father would often see a schoolteacher running on a local golf course. Sometimes Julia would run past him and his training partner to say hello, though the golf club demanded she stop using the grounds.

The runner was John J. Kelley, winner of the 1957 Boston Marathon, and member of the U.S. Olympic Team in 1956 and 1960. The running partner was George Terry. George became her coach.

In July 1960, after a month of formal training with George, Julia ran her first race and became the 880-yard champion in New England. She ran the 800m at the Trials later that month, but did not make the team.

After the Trials, Julia, now a freshman at Smith College, tried to enter the annual 4.75-mile Manchester Road Race in CT at Thanksgiving. The race was founded in 1927 and had high significance in U.S. road racing. Julia was denied. The Amateur Athletic Union had prohibited women from competing officially in road races for years, lest women risk their reproductive health and femininity.

In 1961, Julia filed a formal application to race at Manchester. She ran a longer race in a nearby town a month out, which grabbed the media’s attention and brought a lot of focus and spectators to the attempt at Manchester.

Even at the starting line, AAU and race officials refused to let Julia (and two other women) race. But Coach George helped devise a solution: The women would start behind the men, by a city block.

And Julia ran. Though told she could be banned for life, starting well behind the line and the rest of the runners, and finishing in 128th place, she ran.

Julia returned to the Manchester starting line in 1981. On Thanksgiving Day 2011, at the age of 69, Julia ran Manchester on the 50th anniversary of her first run, in the same 1961 Smith College running tunic she wore 50 years prior. And Coach George, 82, looked on.