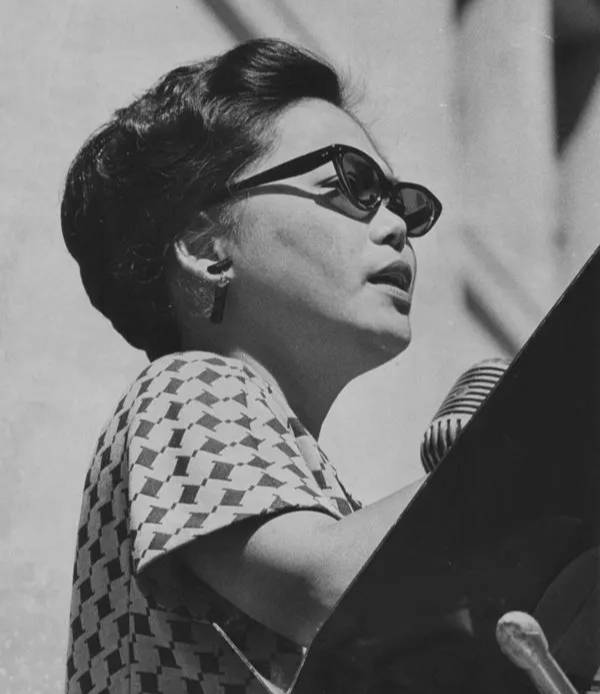 Patsy Matsu Takemoto Mink was born in 1927 in Pā'ia, Maui to Suematsu and Mitama Takemoto, themselves children of Japanese parents recruited from Japan to work the sugarcane fields in Hawai’i. At age four, Patsy had surgery for appendicitis, and her surgeon became her role model through her college years. She wanted a career in medicine.

Pearl Harbor was attacked while Patsy was a sophomore in high school. Far fewer Japanese-Americans in Hawai’i were made to relocate to internment camps than those on the mainland, but her father was taken away in the night for questioning. He returned, but the event left the family feeling unsettled. Still, she graduated high school in 1944 as both valedictorian and student body president. (“The football team backed me. That’s why I won.”)

She first enrolled at the University of Hawai’i, but later transferred to the University of Nebraska. She was pleased at first to land housing in the International dorm; however, that was also where the college housed *all* the students of color. Letters, speeches and protests followed and the university changed its policies.

A thyroid condition requiring surgery forced her return to Hawai’i to recuperate, and Patsy finished her zoology and chemistry degrees there. In the spring of 1948 she started applying to medical schools. Repeatedly. And was repeatedly denied. Not only did schools have quotas for female students (2-3% of new students), WWII veterans were applying in large numbers. She found work at the Honolulu Academy of Arts where her supervisor (and wife of a chief clerk of the First Circuit Court) encouraged her to give law a try.

Patsy applied to the University of Chicago and was accepted as a foreign student, owing to providential error (perhaps) and Hawai’i still being a U.S. territory at the time. If not for this, she probably would have been denied enrollment yet again. In Chicago she met John Mink, a geology student, and they married six months later.

Degrees in hand, the Minks went looking for work. John found a job immediately. Patsy did not. Their only child, Gwendolyn, was born in 1952 and the family returned to Hawai’i. Patsy was admitted to the bar in 1953, but no one would hire a woman who “should not be out late at night” and might have “another child.” Instead, with her father’s help and borrowed furniture, she started her own practice in downtown Honolulu and worked mostly on criminal, divorce and adoption cases.

In the mid-1950s as Republican control in Hawai’i ebbed, Patsy waded into politics, running for a seat in the territorial House of Representatives. She won by a wide margin. Next she ran for territorial Senate seat. She won again. In the year just prior to statehood, Patsy and her fellow Democrats worked on a wide range of social and economic programs, affecting housing, education, unemployment, welfare assistance and more.

Fast forward to 1964 when Patsy Mink became the first Asian-American woman elected to Congress, representing Hawai’i in the House. She would serve six consecutive terms, and continue her work in education, civil rights, and gender equality.

Title IX, which she co-authored with Edith Green, was renamed the Patsy T. Mink Equal Opportunity in Education Act after Patsy’s death in 2002. She was posthumously awarded the Presidential Medal of Freedom by President Obama in 2014. Peace be to her memory.

Patsy T. Mink Papers at the Library of Congress