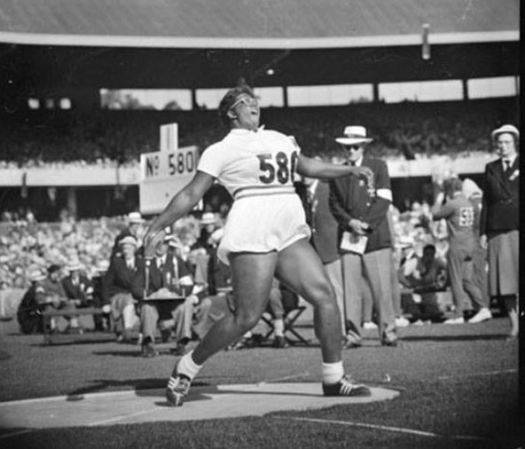 First American woman to earn an Olympic medal in the shot put, and the only shot putter to compete in three consecutive Olympics (1956 Melbourne, 1960 Rome, 1964 Tokyo). She was also national champion in the shot put (eight-time) and the discus (three-time), and won gold in both the shot put and discus in the 1959 Pan American Games in Chicago.⁣

All this travel was expensive, however. Funds for Melbourne were raised with the help of a campaign lead by Brad Pye Jr., a sports editor at the Los Angeles Sentinel and an African-American community activist. And to support herself throughout the rest of her sporting careers, Earlene attended beauty college and became a hairdresser. (Later in her track career she would use her breaks at the salon for throwing practice.)

Earlene retired from track and field in 1965 to join the high-contact sport of roller derby. She played (rolled?) for the Texas Outlaws and the New York Bombers, and lastly for the Los Angeles Thunderbirds before leaving professional sports for good in 1975.⁣

Almost every news article about her, during her throwing days and her roller derby days, mentions her size. One (male) columnist in the San Francisco Examiner even broke down the cost for a roller derby ticket to see Earlene vs. the same cost for seeing Margot Fonteyn of the Royal Ballet in dollars per pound. Two professional athletic women, doing what they love, reduced to the same quantities one would use to comparison shop for ground beef.⁣

When Earlene discovered sports, her body finally made sense to her. She said, "When I was young I was ashamed of my size. I never thought something of which I was ashamed -- my size and my strength -- could make me feel proud. But I am proud now."⁣

"Game Changers: The Unsung Heroines of Sports History," by Molly Schiot, published in 2016