At Oiselle, our vision is to help all women feel strong and free through the joy of running. Our mission is to design great product, build the sisterhood, and improve the sport. May we all experience the transformative power of sports and community.

I have pretty long and narrow fingers, but these gloves are very tight on my fingers and there is a lot of extra material at the end of my finger. I have been wearing them for over a month now and they are starting to fit a little better. My hands are usually pretty warm while I am running, but I would not recommend these gloves on a day below 20 degrees. The mitten cover is good against wind and water though. A mitten version of these would be nice.

After misplacing my power move mittens, I decided to try out these gloves with the windproof mitt. The fingers are tight and really long.. I feel like they're designed for Jack Skellington. There's enough space at the tip for another finger joint! Like another review mentioned, the fingers are super narrow and tight. If I saw this in store first, I wouldn't have bought it. Otherwise I love all the other thoughtful details! Like the fleece thumb for wiping one's nose, the pocket to stuff the windproof jacket into, the windbreaker that easily hooks over the fingers to provide protection, and the grippy bird print. 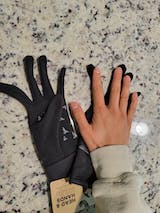 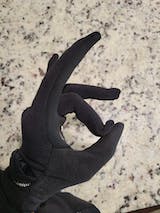 a
a.b.
Great design but flawed

I bought a pair of these last year. Absolutely loved them but lost them. I replaced them last week and while the design is the same—light warmth from the gloves and a brilliant windbreaker-style mitten cover—the cut of the gloves is awful. The fingers are extremely tight and uncomfortable. I have long thin fingers and these are so tight they are uncomfortable after 15 minutes of walking my dog. A long run is not in their future.

I'm a huge fan of the older Power On gloves and mittens (now called Power Move, I think they're basically the same?) and the Lux gloves. My hands tend to go straight from frozen to sweaty and I find myself spending my runs taking my gloves off and putting them back on, especially on these in-between weather days when gloves are a little too cold and mittens a little too warm. Also for rain protection (PNW ftw).

Got the S/M, same as all my other Oiselle gloves. They fit a little tight in the fingers, but they work (I do have long fingers and my hands aren't that small, but the fabric is obviously less stretchy than Lux). However, the shell is too small. It's hard to put on and off, and squashes my little finger against my ring finger. I will probably need to size up.

Other than that, they're exactly what I was hoping for. The shell keeps my hands warm when I warmup or cooldown, and stacks easily in the wrist pocket during the run. It also doesn't have the reflective bird anymore that other people commented on. The grippy birdies on the palm are great.